Staff member
Nitro Member
I remember seeing a picture of a guy in the spectator side bleachers holding up the barrel valve after that epic boomer.
This picture is hanging in the room formerly known as my man-cave.

Nitro Member
Just a normal day in the life for Benny the Bomb...lol.
C

Nitro Member
Ted that is a cool wall.
C 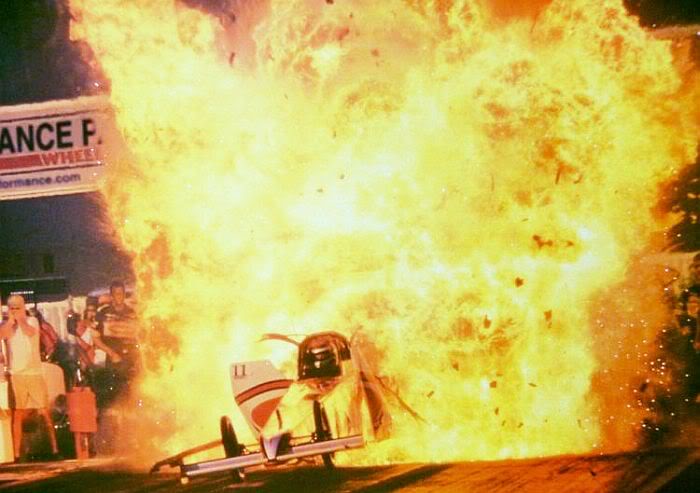 Doug Herbert remembers it like it was yesterday. After all, it’s hard to forget a Top Fuel engine detonation that set him back $100,000 — in 1999 dollars. “One of the things that sticks out most in my mind is Connie Kalitta coming over and saying, ‘Dougie, that’s the worst I’ve ever seen,’ “...

Cliff said:
Ted that is a cool wall.
Click to expand...

Thanks Cliff.
The lower left picture was taken at Tulsa while I was on the Invader NFC team. The middle picture was taken while I was at the Gas Ronda benefit race at Beeline Dragway in Phoenix in April 1970.
The lower right is one I shot of my buddy Hot Rod Fuller at the 2009 Joliet race. I had talked my boss into a small sponsorship on the car for part of that season.
C

Nitro Member
Ted, I remember when the Invader started out. Saw them at Lions, etc. I think the team ran the car until the 1980's. Saw them at Firebird in Phx. Was glad they ran as NFC. The Invader always had those eyes on the car. Good memories.

Staff member
Nitro Member
Not to derail the thread much further but I first saw The Invader run at the late, great Tucson Dragway in the late ‘60s.
I moved to Arkansas in 1970. Around 2001, I was at a Mopar car show in Springdale, Arkansas when the owner, Glenn Solano, entered his AAR ‘Cuda in the show. You should have seen his reaction when I asked him about racing at Tucson. He recalled racing Eddie Pauling’s “Whinemaker” rear engine Cougar FC there.
Fast forward about 10 years and I happened by his house. I first took pictures of the team for him, then he later asked if I wanted to help on the team. That was an opportunity I couldn’t pass up. I was part of the team for five years before I retired. My wife and I built a house in north central Arkansas and we moved away.
The Invader last ran earlier this year at Mo-Kan Dragway. The driver hit the wall way down track. Fortunately nobody was hurt and the damage wasn’t too bad. But, from what I’ve heard, Glenn has decided to hang it up.

Nitro Member
I remember that explosion pretty well because I was standing by the starting line and a big piece of the blower manifold landed about 10 feet from me.
P

Nitro Member
Rick Stewart told me that he lost hearing in one ear as a result of that.

TSK said:
I remember seeing a picture of a guy in the spectator side bleachers holding up the barrel valve after that epic boomer.
This picture is hanging in the room formerly known as my man-cave.
View attachment 5646
Click to expand...

Nitro Member
Thanks for posting the video. That was insane.
You must log in or register to reply here.
Ways To Support Nitromater

Users Who Are Viewing This Thread (Users: 1, Guests: 1)