I can't remember but, I think it is a triple link chain. I might be wrong but, years ago, I was at ATCO drag racing my quad and there were two of them there that night for test-n-tune. Totally Badass!
1

mgty3whlr said:
I can't remember but, I think it is a triple link chain. I might be wrong but, years ago, I was at ATCO drag racing my quad and there were two of them there that night for test-n-tune. Totally Badass!
Click to expand...

Also by my memory the quickest and fastest side by side TFM run in history. In Larry’s press conference, he said if he didn't pedal, it would have gone 270 on that pass. Simply amazing.
C 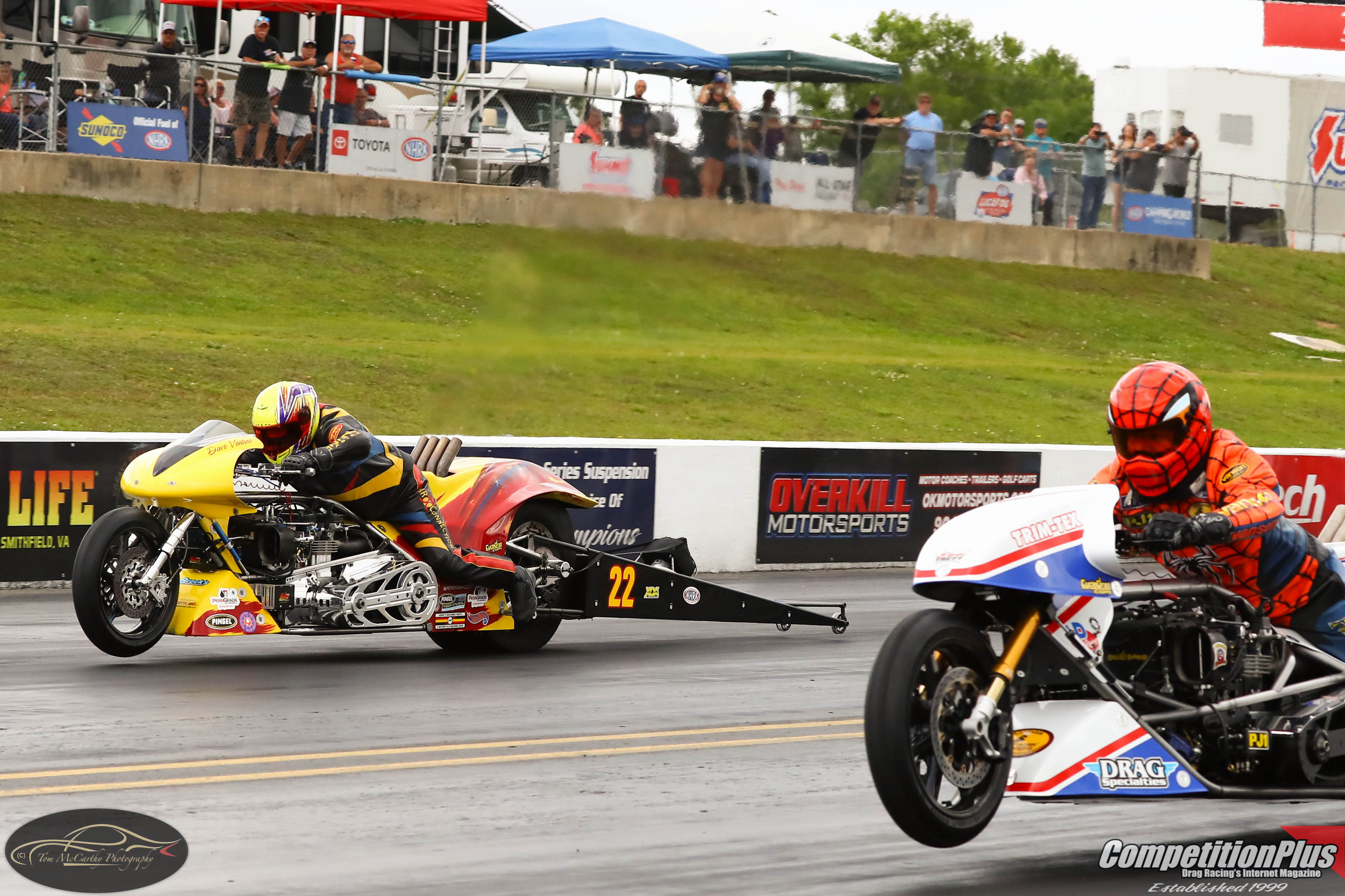 Wow seems so inadequate. On Saturday, May 14, 2022, during an exhibition run between two of the leading inline four-cylinder Top Fuel racers at the NHRA Virginia Nationals, Larry "Spiderman" McBride and Dave Vantine delivered the finest side-by-side performance in the history of two-wheel drag...

Nitro Member
those bikes, and larry's performance in particular, are spectacular. good on nhra to have included them at the virginia race, or whoever's idea it was to invite them.
N

Nitro Member
All the fuel bikes are badass, HDs included. I remember the old days of TF bike, going to Indy and seeing Russ Collins, Terry Vance, and Bo O'Brochta to name a few on nitro inline engines.
N

Nunz said:
All the fuel bikes are badass, HDs included. I remember the old days of TF bike, going to Indy and seeing Russ Collins, Terry Vance, and Bo O'Brochta to name a few on nitro inline engines.
Click to expand...

Nitro Member
Saw an interview with Larry McBride and Dave Vantine. Apparently there is a renewed interest in the 4 cylinder TF bikes from the NHRA side of things, including Jim Head who went as far as to ask Larry about pricing on a TF bike deal. Which isn't shocking, I remember Head was good friends with Elmer. Also, sounds like we may see another exhibition at Indy.

Nitro Member
I'd much rather listen to the 4 cylinder TF bikes than the v-twins.

Staff member
Nitro Member
I ran across this article about the song "Surf City". This should settle it once and for all about who wrote and who recorded it.

"The 1963 number one hit, "Surf City" was co-written by Brian Wilson of the Beach Boys and Jan Berry from the duo Jan and Dean.
According to Stereogum, “Surf City” became Jan and Dean’s only No. 1 song in the United States. It topped the Billboard Hot 100 for two weeks. Notably, this happened before any of The Beach Boys’ songs reached the top of the chart.
The first draft of the song, with the working title "Goody Connie Won't You Come Back Home", was written by Brian Wilson of the Beach Boys. While at a party with Jan Berry and Dean Torrence, Wilson played them "Surfin' U.S.A." on the piano. Berry and Torrence suggested that they do the song as a single, but Wilson refused, as "Surfin' U.S.A." was intended for the Beach Boys. Wilson then suggested that the duo record "Surf City" instead, demoing the opening, verse, and chorus. Wilson had lost interest in the song and believed he was never going to complete it himself. Berry later contributed additional writing to the song, while Torrence also contributed several phrases, but never insisted that he be given writing credit.
Released in May 1963, two months later it became the first surf song to reach number one on national record charts, remaining at the top of the Billboard Hot 100 for two weeks.
The Beach Boys' manager and Wilson's father Murry was reportedly irate about the song, believing that Brian had wasted a number one record which could have gone to his group, the Beach Boys. Brian later told Teen Beat, "I was proud of the fact that another group had had a number 1 track with a song I had written ... But dad would hear none of it. ... He called Jan a 'record pirate'."
Last edited: Nov 21, 2022
C

Nitro Member
Wow Jimi, this is a great article. I grew up in SoCal, Glendale was my home. There used to be a type of animosity (heh) between "Surfers" (and wanna be surfers) and Gremmies (non-surfers). Surfers wore harachi sandels & Pendleton shirts & some smoked a pipe. Bleached blond hair & around summer of '63, hair started getting longer on surfers. As Gremmies, we used to say "surf's up, pray for sharks" and "surfers eat seal (poop)". I was not a big beach fan, rather go to the drags. One cool thing was that some surfers had "Woodies" and others VW bus. Well, I did like the music, Dick Dale was a favorite. Dale later moved here to Phoenix, cut an album in late 90's called Tribal Thunder that sounded an awful lot like his surf music. Ah yes......

Nitro Member
good reading for sure, from a great time in american popular music. i don't think brian and his brothers had a very good relationship with their father.
i wonder if jan and dean used the wrecking crew to help finish 'surf city'?

Nitro Member
I still wanna see that car run 300.......
You must log in or register to reply here.
Ways To Support Nitromater

Gray is qualified No. 7

R
Savoie To Run A Suzuki And A Buell
2