Vegas Nationals Huge Opportunity for Justin Ashley Championship Goals​
PLAINVIEW, NY (October 27, 2021) --- With two races remaining in the 2021 NHRA Camping World Drag Racing Series, second year driver Justin Ashley has inserted himself into the Top Fuel championship hunt thanks to an impressive run in his first Countdown. The driver from Plainview, New York, has a win at the Texas NHRA Fall Nationals, a runner-up at the Reading Nationals and two semifinal finishes through the first five playoff races. The 2020 Rookie of the Year has moved from 7th place in the points to 3rd place and sits just 73 points out of second place. He is within striking distance of first place with a strong finish at this weekend’s Dodge//SRT NHRA Nationals from The Strip at Las Vegas Motor Speedway.
“We have made the most out of our first Countdown together as a team,” said Ashley, following the Thunder Valley Nationals. “The expertise and experience of crew chief Mike Green has proved to be invaluable, and the leadership of Dustin Davis has been elite. This Smart Sanitizer Vita C Shot Top Fuel team has made huge strides in performance all season and we are excited to see what we can do over these last two races starting this weekend in Las Vegas.” 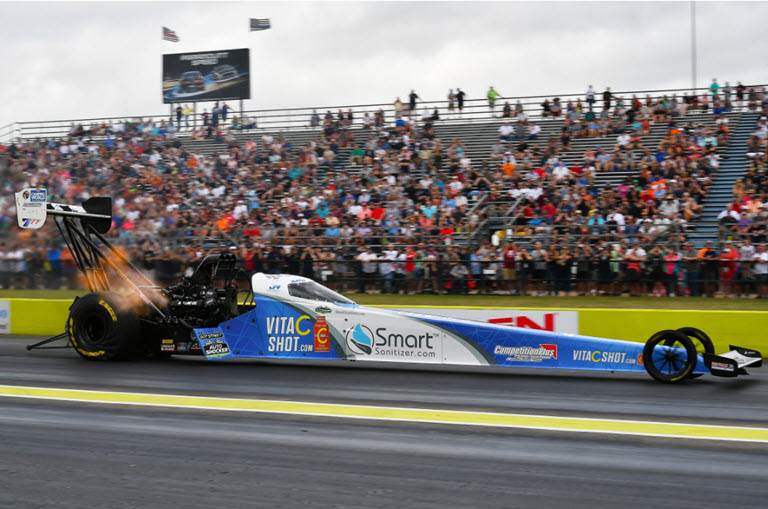 Justin Ashley, Smart Sanitizer Top Fuel dragster powered by Vita C Shot (Photo credit Ron Lewis Photography)​
This season has seen Ashley, who won his first event last July at the NHRA Summernationals, develop into one of the most consistent and successful drivers in the series. A season opening semifinal finish at the historic Gatornationals was followed up by runner-up finish at the Winternationals in July. The Smart Sanitizer Vita C Shot team really hit their stride once the Countdown began. Entering the seven race playoffs as the No. 7 seed Ashley quickly jumped to No. 4 in the standings with his second final round appearance of the season in Reading, Pennsylvania. The next weekend Ashley raced to the semifinals in Charlotte but an early exit in St Louis slowed his momentum momentarily only to have his second career victory in Dallas, Texas catapult him into the top three.
On race day at the Texas Motorplex Ashley defeated Billy Torrence, Brittany Force and Steve Torrence in a dominant day of race car performance and driver execution, winning two races on hole shots and then simply outrunning his opponent in the final round. The win closed the gap on the point leaders and his semifinal finish in Bristol, Tennessee, two weeks ago established the young driver as a legitimate championship contender.
“Dallas was an amazing weekend and to follow that up with a solid race in Bristol really gives our whole team a lot of confidence heading to Las Vegas this weekend,” said Ashley. “Our team is very young, but we have guys with championship winning experience and extraordinary talent. Mike, Dustin, and the entire team have been amazing, and we are only getting better every race. The off weekend between Bristol and Las Vegas was a great opportunity for me to recharge my batteries and get focused on this championship.”
As the season has progressed Ashley has worked on and off the track to build his race program. At the beginning of the Countdown, he announced Vita C Shot would be joining the team for the rest of the season and throughout 2022 as a co-primary sponsor. He is also working to solidify relationships with Auto Shocker and KATO Fastening Systems, two major associates who have been with the team since its inception. The team is continually looking for partners to introduce to the sport of NHRA drag racing as one of the most dynamic marketing environments in sports business.
As part of his marketing program Ashley will have his Top Fuel dragster on display during the SEMA Show, November 2-5, at the Las Vegas Convention Center in the NHRA booth (Booth 1000). He will also be meeting with attendees at the Auto Shocker booth (Booth 53089) during the event.
“We are excited to have Vita C Shot onboard for 2022 and grateful for the support of Chip Lofton,” said Ashley, “We are taking the time to build on our existing relationships for the 2022 season and have a lot of opportunities for new sponsorship as well, but right now we are focusing on a strong finish over the final two races. Then our focus will immediately shift to partnerships and the business of our program.”
Qualifying for the Dodge//SRT NHRA Nationals gets underway at 4 p.m. PDT on Friday with two more qualifying session on Saturday at 1:00 p.m. and 4:30 p.m. Final eliminations will begin at 11:00 a.m. on Sunday from The Strip at Las Vegas Motor Speedway.

About Justin Ashley Racing
Justin Ashley Racing in partnership with Davis Motorsports fields the Smart Sanitizer Top Fuel dragster powered by Vita C Shot in the NHRA Camping World Drag Racing Series. During his Top Fuel rookie season in 2020 Justin won the NHRA Summernationals, finished in the Top Ten and was recognized as the 2020 NHRA Rookie of the Year. Prior to his professional debut Ashley has three wins in Top Alcohol Dragster on the Lucas Oil Series. He is the son of multi-time NHRA national event winner Mike Ashley. In 2017, he was named to the Drag Illustrated magazine’s 30 under 30 list, highlighting some of racing’s most promising young individuals on and off the racetrack. When he’s not racing, Ashley serves as President of Ashley Developers, a real estate investment organization dedicated to the rehabilitation of distressed properties. To learn more about Justin Ashley Racing, visit JustinAshley.com.
Click to expand...