Las Vegas Equals Another Semifinal Finish for Justin Ashley
​
LAS VEGAS (October 31, 2021) --- Second year driver Justin Ashley and the Justin Ashley Racing Vita C Shot Top Fuel dragster raced to another semifinal in the incredibly competitive NHRA Countdown to the championship today at the NHRA Las Vegas Nationals. Through six races Ashley has a win, a runner-up and two semifinal finishes. Today, the No. 3 qualifier, outran Cameron Ferre and Alex Laughlin before dropping a close race to point leader Steve Torrence in the semifinals.
“It was a really productive weekend for us,” said Ashley, a two-time Top Fuel national event winner. “Every Top Fuel car out here is tough. We are fourth in the points but when you look at our collective Countdown, we have had a tremendous amount of success. We can’t worry about what the other cars do. We have to focus on ourselves. I am proud of the group that we have, and I am proud of the job they did all day today and all weekend.”
In the first round Ashley was facing Cameron Ferre and the second-year driver knew he could not take the young driver for granted. Both race cars launched hard and by half-track Ashley was on his way to the quarterfinals after Ferre smoked the tires. Ashley’s run was smooth and right down the middle of the groove. His winning time of 3.734 seconds at 326.71 mph was enough to give him lane choice in the quarterfinals over Alex Laughlin. 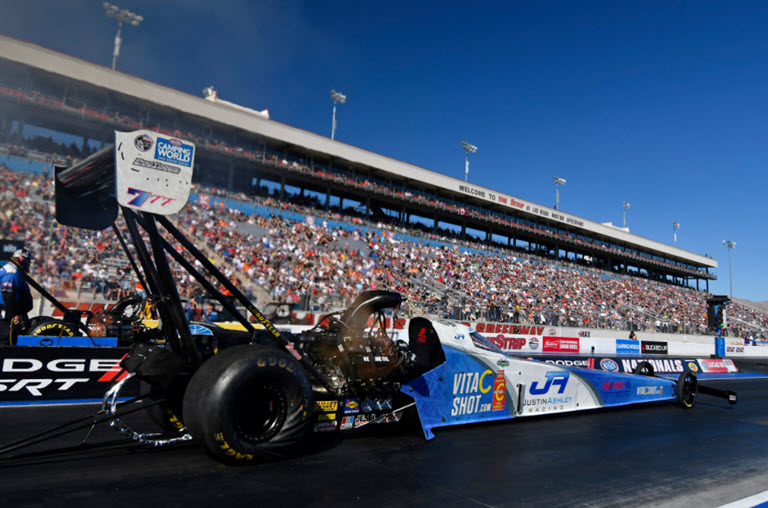 Justin Ashley, Vita C Shot Top Fuel dragster (photo credit Ron Lewis Photography)
​
Ashley was looking to avenge a loss to Laughlin earlier this season from the U.S. Nationals. The 2020 NHRA Rookie of the Year was also looking to keep his championship hopes alive. Sitting fourth in the points the young driver needed to keep pace with the other leading Top Fuel dragsters. Ashley was on top of his game grabbing a significant starting line advantage with a .058 reaction time and a near mirror image of his first round winning elapsed time. His win light came on just 3.739 seconds after his Justin Ashley Racing Vita C Shot Top Fuel dragster left the line.
Advancing to his fourth semifinal of the Countdown Ashley faced point leader Steve Torrence giving up lane choice by .003 seconds. Just before the semifinals Ashley’s crew was feverishly working on his Vita C Shot Top Fuel dragster that also gets support from Auto Shocker and KATO FasteningSystems right up until the final moment before his race. Ashley rolled up beside Torrence and he took another starting line advantage off the line. As the race cars moved down the track, they were neck and neck, but Ashley came up a few thousandths of a second short to advancing to the final round. He made his quickest run of race day, 3.727 seconds in a losing effort.
“We had a big issue before the semifinal race,” explained Ashley. “I don’t know the details of what happened. I leave that up to (crew chief) Mike Green and the team. They always do an outstanding job. They strapped me into the race car in the pits and we barely made it up to the starting line. We went down the track with a 3.72 and made a good run. We wanted to go out there and win that round since it was a big round for our championship hopes. But nonetheless, all things considered, it was very impressive. It’s a testament to our team that everything was so last minute yet it all went so smoothly.”
Going into the final race of the season Ashley in only his second year in Top Fuel is mathematically still in the championship hunt but will need some major assists at Auto Club Raceway at Pomona to secure his first Top Fuel championship.

QUARTERFINAL FINISH HAS JUSTIN ASHLEY ON CUSP OF COUNTDOWN