Justin Ashley Gets Boost from Vita C Shot For Carolina Nationals and Beyond
​
CHARLOTTE, NC (September 17, 2021) --- Justin Ashley announced today a new co-primary sponsor for the remainder of the 2021 NHRA Countdown to the Championship and 2022 NHRA Camping World Drag Racing Series season. Beginning at this weekend’s DeWalt NHRA Carolina Nationals his Smart Sanitizer Top Fuel dragster will be powered by Vita C Shot, a company backed by longtime NHRA supporter Chip Lofton.
The past two seasons Lofton’s Strutmasters.com has adorned the side of Ashley’s 11,000 horsepower land rocket. Beginning in Charlotte, Vita C Shot will take its place as the newest addition to the Justin Ashley Racing stable. 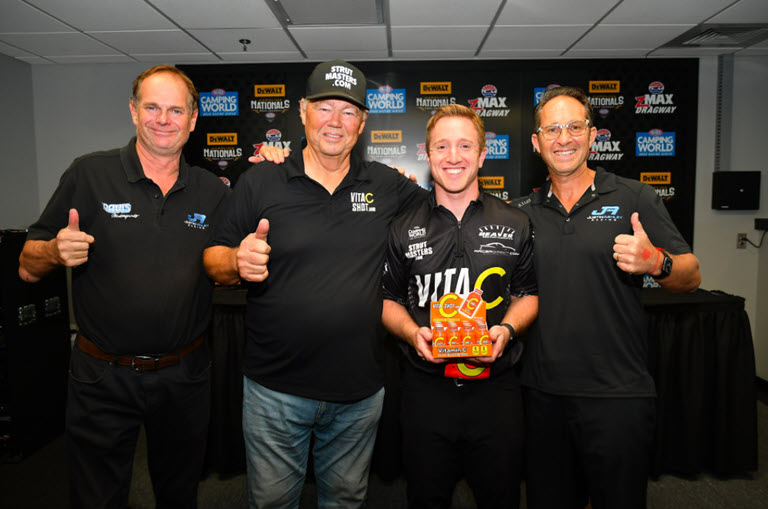 (from the left) Justin Ashley Racing Marketing Director Roch Bailey, Chip Lofton, Justin Ashley, and Mike Ashley, photo credit Ron Lewis Photography
​
“I’ve had the privilege of spending time with Chip Lofton in a personal and professional capacity throughout the last two plus seasons. He is a great businessman, but more importantly he is special person. Our team is fortunate to have him in our lives,“ said Ashley, from the zMax Dragway media center.
“Representing Strutmasters.com throughout my career has been nothing short of spectacular. The opportunity to represent Vita C Shot is one I am very much looking forward too. While my team and I focus on elite level performance on the racetrack, Vita C Shot provides elite level energy to its customers.”
Vita C Shot is a vitamin energy shot that is infused with both vitamin C and a minimum amount of caffeine, providing an all-in-one solution for people looking to support their immune health and increase their energy. It contains zero sugar and zero calories. It is available online and at both convenience and grocery stores across the country.
“Vita C Shot is owned by MarkOne Health and Pro Stock racer Mark Beaver and we are taking some of their marketing funding and putting it on Justin’s Top Fuel dragster for the rest of this year and into 2022,” said Chip Lofton, co-founder Vita C Shot. “Our focus is on raising the branding awareness and promoting a product that we feel really helps people’s immune systems. Everything is about timing, and we think connecting with Justin will not just help us raise awareness but also help with our B2B efforts. He is an amazing young businessman and racer which is a great combination for Vita C Shot.”
Three professional qualifying sessions will precede the race on Sunday which will be televised nationally on Fox.
Click to expand...