Nitro Member
Great post Randy.
I ran a cross an article today that is a statement from another driver that witnessed the accident.

Sprint car driver Cory Sparks has come forward with his side of the story, telling about the angle he witnessed of the event. "From what I saw, Tony did everything in his power to turn down away from Kevin to avoid him," he was quoted in the story. "People say that they heard the engine rev up and he gassed it. In a spring car, the only way to steer is you steer with the rear wheels as much as you do the steering wheel. In my opinion, what he did was he gassed it to turn down away from him."
He also noted in the article that the videos posted online don't give an accurate portrayal of what happened. There was no video in Stewart's car.

Registered member said:
No....now you've done it. All the Tony haters that blame him can see just fine from their couch. No difference....right?

This image has been resized. Click this bar to view the full image. The original image is sized 2000x1124 and weights 190KB. 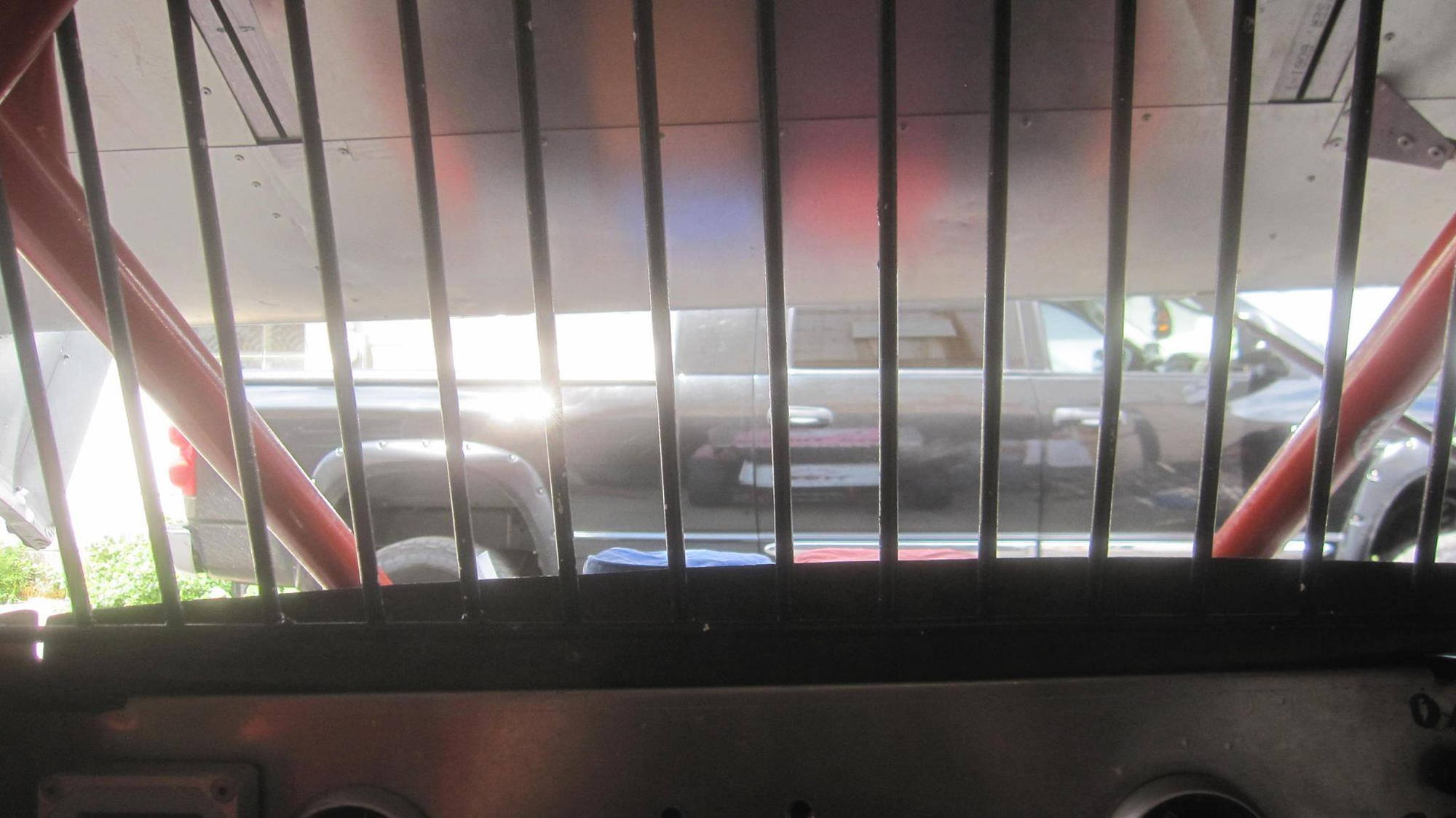 Here's the view from the driver's seat of a winged sprint car that was posted in PR&C.

Now put a wing on the front with tall side spill plates blocking your peripheral vision, put it on a poorly lit dirt track following another car who is throwing mud and dirt through your windshieldless race car, now put a kid in a black firesuit and helmet moving right and left on the track as you and the cars in front of you approach all pissed off. As you approach he takes two steps down in front of you.

Here's Tony's car as posted by someone else earlier. Just exactly how much can you see at night in it? Do you think you would have seen someone approaching you uphill from the right...at night...with a small stature...in a black firesuit and helmet...when you are behind another car that is throwing mud and dirt in your face...with flashing LED yellow caution lights glaring in your tear offs located in the next corner in front of you???
Click to expand...

5 other drivers/cars with the same wing configuration got by Ward just fine. Here's some slo mo for you below. After 27 seconds, all motors are idling and drivers are going by Ward. Yes, #45 was somewhat close to Ward. Then at 57 seconds, you hear a blip. It appears Stewart was low at the same time you hear the blip, then suddenly he goes high and clips Ward. Look, Ward should have never been out there. That's a given. It's not the first time Stewart has rubbed a competitor during a caution lap letting them know not to mess with him. Tony's ego got the best of him and now a young man is dead.

Registered member said:
In a spring car, the only way to steer is you steer with the rear wheels as much as you do the steering wheel.
Click to expand...

That is true when under power. But I've seen sprint cars entering the pits faster than those going by Ward. They're not on the gas to steer and maintain control just fine. Sometimes they're coasting into the pits.

Nitro Member
Drivers are always saying how when they strap themselves in the seat they become one with the car... they are completely aware of everything that is going on everywhere. They are professionals who can feel when somethings wrong, they can feel where everyone is on the track, its a sixth sense.

To plead ignorance on the drivers part is in my opinion ridiculous. I don't believe Tony meant to hurt, let alone kill the guy, but how about consider some poor judgement with tragic results?
G

Registered member said:
It is my understanding that the so-called 'blirp' of the throttle was an attempt to make car turn quicker as to avoid hitting the young man standing in front of his car, the stagger and design of these cars are to turn a sharp left. Now your right Tony has a reputation of having a temper just like the young man that jump in front of these cars on the track, it's the nature of this sport, but it does not make them killers. This person put himself in harms way, no body forced him. Tony has done a lot of good things for this sport, supporting local tracks and helping charities for children, temper maybe but he also has a big heart and feelings. I think everyone needs to set back and take a deep breath until the facts are out and not pre judge the person, truth will come out n due time.
Click to expand...

I'm not pre judging anyone. I've got no dog in this hunt, and I really don't have any passion one way or the other.
It was an unintentional accident.
Tony Stewart is my favorite driver because of his attitude. He brings old school back, and I like that.

IMO, I disagree with the opinion that he was hitting the throttle to move the car. Last I knew, a sprint car was equipped with a "steering" wheel.
At that slow speed, and close proximity, turning the wheel would have been the most natural, defensive reaction, not blirping the throttle that naturally kicks out the rear a mear few feet away.
Sorry, but that excuse doesn't work for me. Tony was just being Tony, and I am sure he had no designs on hurting anyone or anything.

Tony will always be the alpha male on the track.
IMO, That time unfortunately, his brashness 10% and the kids temper and general stupidity 90% ended in an avoidable tragedy.

I'm just hoping we get Tony back.

Registered member said:
Some roundy round tracks are already making a track rule for drivers that you can not get out of your car unless if it's on fire, or are told to by track safety officials when they are on the track.
Click to expand...

I can guarantee you that HUNDREDS of local tracks will have that rule in place and enforced by this weekend!

Nitro Member
Sprint cars have slow steering boxes, so under cations or pace car speed they don't turn very well. The only way to turn one of those cars quickly at a reduced speed is to blip the throttle. Kevin Ward Jr. I believe was a whole lot closer to Tony's car than many believe, possibly even trying to reach in and show his displeasure. This was a perfect storm of everything gone wrong. The track is your typical Saturday night dirt oval. There is lighting, but it's all in the infield, meaning it's lit from the inside out. Ward was on Tony's outside wearing all black, at night. There were no safety workers or trucks nearby at the time of the accident. Look how low the right side board on the wing extends while keeping in mind the circumstances of the time. 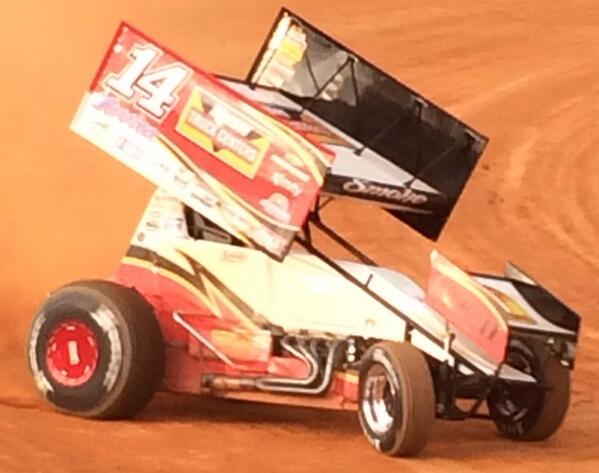 And sadly there was a driver chasing down a moving vehicle on foot. This was just a tragic accident that could've happened anywhere, and unfortunately did. Really glad to hear local short tracks are stepping up and making a rule about drivers staying in their cars, unless there's a fire, until safety workers arrive.

Registered member said:
5 other drivers/cars with the same wing configuration got by Ward just fine.
Click to expand...

Just fine? The car in front of Tony barely missed him!

i have driven these cars,the right side board on the top wing will block out an entire car let alone a person standing there,i now work on the 45 car in the video and the driver said he just saw him at the last second and just missed him,Tony had even less time to react to the situation.people in the stands or watching this video have no idea how fast these thing happen and how limited our view is inside the car.it was a very bad turn of events that happened but we all know the dangers involved in the sport we love.
Click to expand...

The driver of the 45 car, who BARELY missed him has went on record to say that he didn't see him until he was right beside him. That said, I can't help but wonder what makes all the haters so sure that Tony HAD to see him. Amazing, really. Amazing and irresponsible.

Registered member said:
I can guarantee you that HUNDREDS of local tracks will have that rule in place and enforced by this weekend!
Click to expand...

AS THEY SHOULD!!! The one thing I keep missing in the national coverage that is getting worn out on this deal is that if the kid had not charged out to confront Stewart, he would still be alive. As someone posted earlier, 90% of the fault lies with that.

Registered member said:
5 other drivers/cars with the same wing configuration got by Ward just fine..............

4 other drivers got by him just fine, he was near his own car, then ran down the track when the 45 car drove by. Look again at the video, sure looks like the 45 car hit him too, he's doubled over just as Tony gets to him.

Nitro Member
Jeff Burton fills in for Tony at Michigan.

Nitro Member
No charges for Tony. Ward was under the influence of marijuana during the race, and that the levels were enough to impair his judgment. Don't do drugs, and race a car!

Registered member said:
No charges for Tony. Ward was under the influence of marijuana during the race, and that the levels were enough to impair his judgment. Don't do drugs, and race a car!
Click to expand...

I didn't expect any charges for Tony, but I certainly didn't expect that news about Ward! Zero Tolerance for drugs and race cars.

Registered member said:
No charges for Tony. Ward was under the influence of marijuana during the race, and that the levels were enough to impair his judgment. Don't do drugs, and race a car!
Click to expand...

I wonder if the kid's moron dad will come out bashing his son for being stoned now?
B

Nitro Member
After the testing came back POSITIVE as far as I'm concerned it was a done deal CASE CLOSED.

Nitro Member
weed stays in your system for up to 30 days,how do they know he was stoned at the race??

Registered member said:
weed stays in your system for up to 30 days,how do they know he was stoned at the race??
Click to expand...

Not sure, but they said they were able to tell he was high to the point it impacted his judgement. There must be a blood test you can do to determine this.

Nitro Member
"There is toxicology evidence in the case relating to Kevin Ward that indicates that at the time of operation he was under the influence of marijuana," Tantillo said. "The levels determined were enough to impair judgment

Registered member said:
"There is toxicology evidence in the case relating to Kevin Ward that indicates that at the time of operation he was under the influence of marijuana," Tantillo said. "The levels determined were enough to impair judgment
Click to expand...

Wow, Yea not good
You must log in or register to reply here.
Ways To Support Nitromater

T
My Talk With Tony Stewart

"Wildest Ride In Racing" Keeps Ron Capps On His Toes