The Greek calling it a career (1 Viewer)

Nitro Member
Paul, do you know what her ET was?

Thank you so much for posting this link, being born in 1955 I was to young to see the early incredible history of the Greek, I have always been a fan, now even a bigger fan now
C

Nitro Member
Mark Watkins, I think John Mulligan died in 1969 and that was before the Greek Fleet. Kansas John Wiebe, Don "Mad Dog" Cook, Bob Mad Bomber Creitz,, Jim Superman Nicoll were the co-conspirators along with Chris Karamesines. You could write a book about these guys.....

Huge said:
He is an amazing man and funny also. I enjoy listening to his raspy voice when we are all staying at the same hotel and he is having breakfast. I'm 64 and he calls me kid.
Click to expand...

According to my math, if he joined the Army at 16 in 1945, that makes him NINETY ONE YEARS OLD! I will be 77 in a little over a month so it was easy to figure out his age. I remember one Friday night years ago at Sears Point, he had low ET at 4.63 over the best at the time. It looked like he was going to win that race but after the burnout they couldn't get the starter off. He won a lot of races in his long career but it's too bad he never won an NHRA wally! I hope Krista gets a good sponsor because she will add some new young blood to the sport.

Cliff said:
Paul, do you know what her ET was?
Click to expand...

Nitro Member
Greek's 92, never understood the mystery going on for the last 84 years. What's he hiding besides a candle. And he got there before Garlits.

Krista is a spitting image of Bobby, and her Mom.
That same exact enthusiasm, personality, determination. The same everything just all mixed up.
Drag along Grandpa, and with all of the support she has behind her, and the ingredients needed to make an impression that's for sure. The legacy continues.

Bobby reminded me alot of a decaffeinated John Force.

He dug up and paved Pomona almost by himself. almost

Dom being able to watch, makes it extra special.

BB did a cool story on Krista and Grandpa. 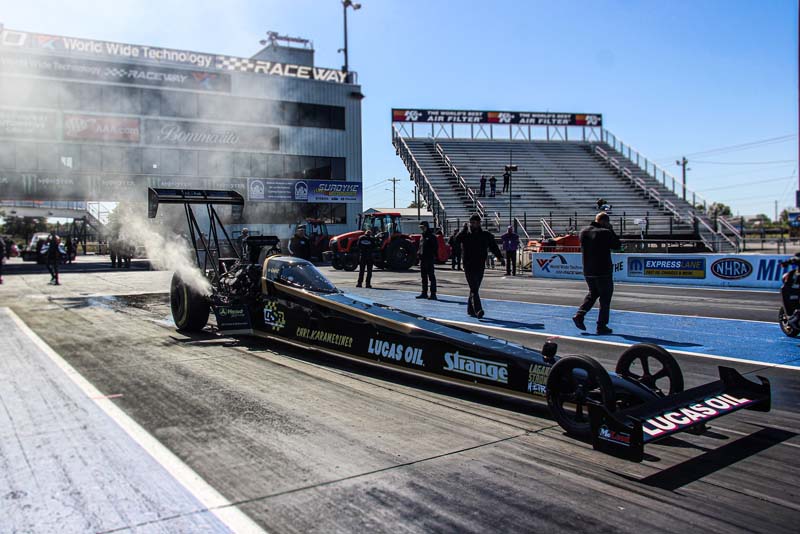 When you're the granddaughter of the longest-tenured Top Fuel drag racer in the sport and the daughter of a former Top Fuel, there are certain expectations. There was never a doubt the natural progression for A/Fuel racer Krista Baldwin would land her in the family tradition. The question was...

Nitro Member
Cool story. Hope they are able to find some funding to make it happen.
R

Al said:
This guy is truly amazing. Will anyone else ever match his age (whatever it is) with a Top Fuel license ?
Click to expand...

He may no longer race, but big Jim Dunn I do not see "retirement" being a word he even knows. Does she inherit the lifetime Lucas Oil sponsorship or will that end? Maybe it stays because Chris is involved.

Nitro Member
So.... who did it first?

stitcherbob said:
So.... who did it first?

Nitro Member
OK, Frank Cannon, Lions Drag Strip, 1963. I think he recorded 200 twice??? I'd believe this cuz the clock at Lions were honest. No "pop corn times". The story behind pop corn times is that the track had one source of electricity. When they would turn on the pop corn machine (or other devices) it would sap power from the clocks, & you'd get a false reading. Lotsa stories about unreal times in 1950's & '60's. For what it's worth, when the Greek ran that 204 at Alton, he really believed it. Back then they used a chart for MPH. Basically it was an ET for when they car went thru the traps. That number was compared to a chart in the tower & converted the time to MPH. The charts only went to a certain speed (maybe 190 or 195 in those days) and a run like the Greek's was "off the charts". When he ran that 204, they had to do the math in the tower & it took them some time. They may have called the company who made the clocks & checked with them. But they did come up with the 204 figure & that was announced. The Greek ran 199 at Kansas City & few other places to back up the 204. Also, strong rumor is that they ran hydrazine, which the Greek never admits to. The story I heard was that 5% hydrazine was worth 10 MPH at least, if it didn't melt the engine (which happened). Bobby Vodnik in The Shadow AA/FD ran 214 when everyone else was 204 or so. It's said you could tell it was hydrazine cuz of the oder.
C

There are a lot of stories about HYDRAZINE. I can tell you that NO ONE ran as much as 5% that I know of. We put 6 Oz. in a 7 gallon tank of 83% with a .150" down 392 with 354 heads and it shook so hard it broke the crank and made me dizzy. Hydrazine was introduced to the west coast through Jon Kranenberg. Jon was the Greeks CC before he came out here so that tells you something. The first car to run it out here was the Speedmaster car where Jon got a job doing Motors. The first sign of it was the Amona smell. I still have respratory problems from different stuff we put in the tank. When NHRA banned it a dye was put in the Nitro to make the flames Green. John Mitchell made a filter that was a tube with activated Charcoal in a bag in it to filter out the dye. I can't say that Hydrazine gave you X amount of Horsepower or Speed, but it really made the Motor pound. It leaves permanante damage to to your hands (I can attest to that). Beside the T/F cars the Jr. Fuelers ran it a lot. You could get it in different strengths, but we got ours from out the back door at Rocketdyne. Other additives were Iodine (pure), oil of Mirbane (smells like shoe polish), Benzine, Propylene Oxide, (great because it dissapates quickly for fuel check) and Nitro Propane. The most thing we found out about them is they are the piston mfgrs. friend.
C

Nitro Member
Roger, I know that hydrazine is carcinogenic. Not surprised you have respiratory problems due to the chemicals. I have asthma, so know how that feels. I wanted to ask what does iodine & oil of Mirbane do as an additive? I never heard of anyone using that. Thanks for the info about % of hydrazine. I have heard so many stories, but all agreed that a small amount of hydrazine would add power and could destroy the motor.

Nitro Member
"If the ground is shakin; and the flames are green, he must be using that Hydrazine."
#1 -
https://www.dragzine.com/news/flashback-friday-the-story-of-the-leathal-fuel-called-hydrazine/
#2 - 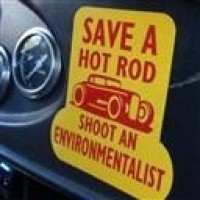 Posts about racing written by euclidsbridge

Hydrazine Video: This 1966 NASA Film Is All About Hydrazine, How Bad It Is, and How It Is Properly Handled | News Break

While nitromethane is some tough stuff when it comes to fuel, the legend and mystique surrounding Hydrazine persists. Hydrazine is rocket fuel and it was reportedly used on and off by drag racers in varying levels during the 1960s to increase performance and send parts into low Earth orbit. Some...

Nitro Member
They used to call him The Crazy Greek. Some of the tracks they raced at back then didn't have guardrails & The Greek would actually go off the track "into the weeds" & drive back on the track, never lifted. Story about the Greek at Lions. Went thru the top end sideways & never lifted. Probably a lot more stories like that. Oh, FWIW, the dragsters back then had headers that pointed down towards the track surface. Used to call those headers "weed burners", cuz the exhaust would be blowing on grass, weeds, etc as the car went down the track. I was at San Gabriel once & a AA/Fuel Competition Coupe (dragster frame w/ car body) was on the line, getting ready to run. I was at the fence & could feel the exhaust hitting my leg. Wow... San Fernando had no guard rails. Left lane had bales of hay originally, which got taken over by trees. You went off the track in left lane & went down into a gulley. Right lane had nothing except the Hot Pits (cars that had to be push started). I can remember seeing people scatter cuz someone in the right lane got loose. Ah, yes......
B

Nitro Member
Id like to know how many miles are on his Chaparral trailer, or if that trailer could tell some stories.
R

Butch said:
Id like to know how many miles are on his Chaparral trailer, or if that trailer could tell some stories.
Click to expand...

Cliff said:
Roger, I know that hydrazine is carcinogenic. Not surprised you have respiratory problems due to the chemicals. I have asthma, so know how that feels. I wanted to ask what does iodine & oil of Mirbane do as an additive? I never heard of anyone using that. Thanks for the info about % of hydrazine. I have heard so many stories, but all agreed that a small amount of hydrazine would add power and could destroy the motor.
Click to expand...

The stuff we tried was not just things we got from our Gilbert Chemistry Set. While I was in Graduate school I drove for other people (because of time and money) and one was Don Madden in the Howard Cam Rattler. Don's brother was best friends with the Chemist at Cox Model Engines and they made different componds for their stuff. A lot of it could not be sold because it was carcinogenic and very bad to handle so the thought was any Idiot that would strap themselves into a T/F car was the perfect candidate to try it on a larger scale. They were exiciters. The Iodine was in crystals and you put it in just before firing up. I belive it was 14 Molar. The trouble is just like Nitromethane a by product is an acid only worse. The Oil of Mirbane has the same charistics as Nitro Benzene, but we found out that it was not as good because it was an oil which actually contaminates the Nitro where the NB does not. I did However think about shining my shoes when we used it. The reality with fuel additives is with the advancements in engine technology you're better off to stick with the fuel you are required to run and work with the tuneup.
You must log in or register to reply here.
Ways To Support Nitromater