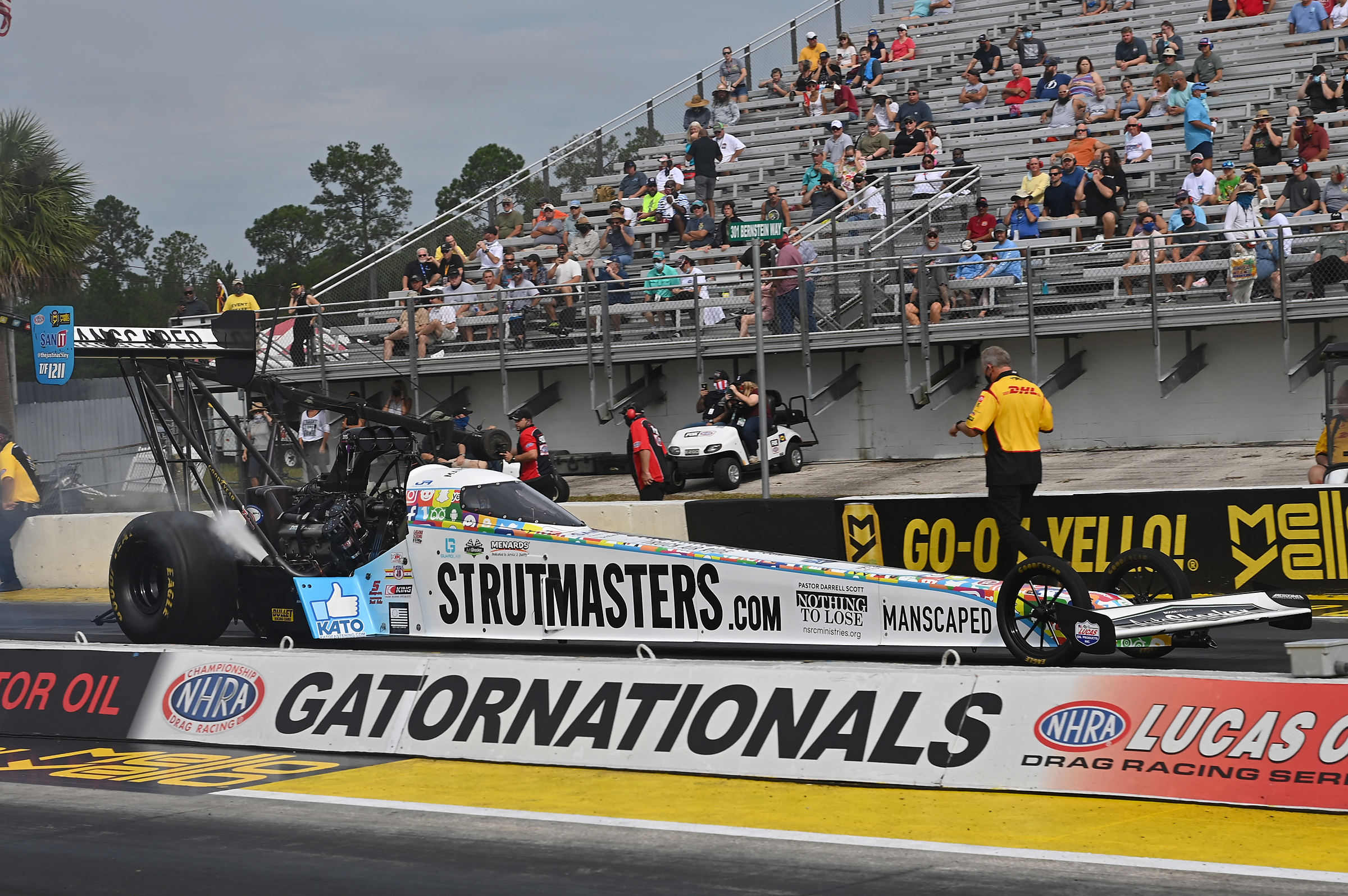 GAINESVILLE, FL (September 27, 2020) --- For just the second time this season the Strutmasters.com powered by MANSCAPED™ Top Fuel dragster and driver Justin Ashley did not advance to the quarterfinals. In what has become a common occurrence this season Ashley faced reigning U.S. Nationals champion Shawn Langdon in the first round for the fourth time. Coming into today’s Gatornationals Ashley held a 2-1 first round win advantage and the fans were looking for some seriously low reaction times from these two excellent “leavers.”

As soon as Ashley hit the throttle, which he did in .039 seconds, his dragster was wounded, missing the power of a left side cylinder. The Strutmasters.com powered by MANSCAPED dragster continued to accelerate as it labored to catch up with his opponent. Ashley kept his race car in the groove but he was unable to catch up to Langdon. The quick exit was a hurdle that Ashley and his team were ready to put behind them.

“It is tough going out in first round at any race,” said Ashley. “With being fourth in the points with everyone so bunched up maybe it hurts a little more than usual. At the end of the day it is our job as a team to put this race behind us. We have St. Louis next weekend and I am focusing on that race already. We have to do everything we can to give ourselves a chance to win there. Regardless this team has fought through a lot just to be in the position that we are. Being fourth in the points is a privilege all by itself.”
Ashley and his young team will be working to keep their racing groove moving in the right direction. Two weekends ago Ashley won his first career race (the postponed Summernationals) and then raced to the semifinals at the U.S. Nationals. Next week the team will be back in action at the NHRA Midwest Nationals outside St Louis at World Wide Technology Raceway.
“It will be really nice to get to another NHRA market,” said Ashley. “I enjoyed racing in Indy a lot but now that we came to Gainesville and you see all the fans in attendance it really is nice to be able to engage with them. At the end of the day that is what separates NHRA from every other sport. Every ticket really is a pit pass. To be able to see the fans, to be able to be out here racing over 300 mph in our Strutmasters.com AutoShocker Top Fuel dragster it is just awesome. The truth is we couldn’t do it without the support of our marketing partners like MANSCAPED, Kato, Lucas Oil, King Engine Bearings, Justice Brothers, Sanit and the list goes on and on.”
“I am looking forward to St. Louis because I have never raced there in any categories. It will be a fun experience. I remember going there as a kid and I used to love sitting in those wrap-around seats. I used to be in the stands at that race and I am looking forward to being on track this coming weekend. It has a stadium feel that a lot of places don’t have. St. Louis is a great facility and has really great fans,” added Ashley.
Photo courtesy of Ron Lewis Photography for media use only
Qualifying Results
Q1: 4.818 sec, 151.99 mph; Qual. 10
Q2: 4.118 sec, 203.06 mph; Qual. 10
Bonus Points: 0


About Justin Ashley Racing
Justin Ashley Racing in partnership with Davis Motorsports fields the Strutmasters.com Top Fuel dragster in the NHRA Mello Yello Drag Racing Series. As a driver Ashley is a two-time winner in Top Alcohol Dragster on the Lucas Oil Series and is the son of multi-time NHRA national event winner Mike Ashley. In 2017, he was named to the Drag Illustrated magazine’s 30 under 30 list, highlighting some of racing’s most promising young individuals on and off the racetrack. When he’s not racing, Ashley serves as President of Ashley Developers, a real estate investment organization dedicated to the rehabilitation of distressed properties. To learn more about Justin Ashley Racing, visit JustinAshley.com.