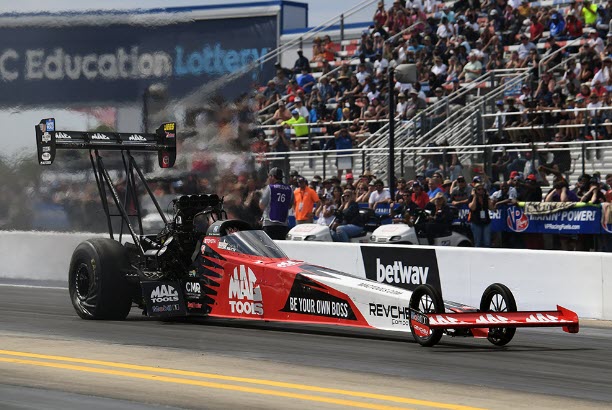 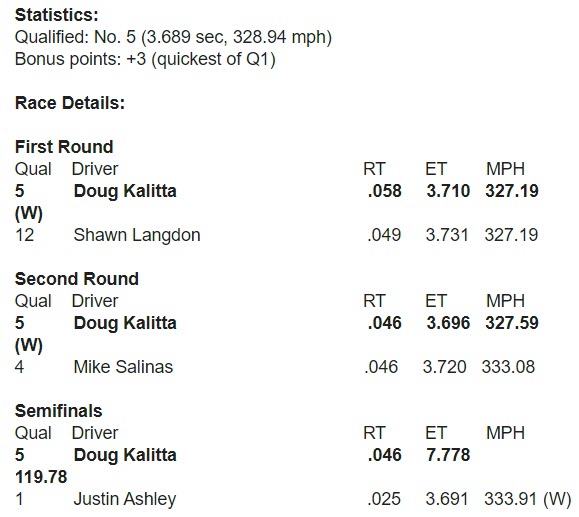 Racing the familiar and dominant red, black and white Mac Tools Toyota Top Fuel dragster Doug Kalitta brought confidence to the NHRA Carolina Nationals this weekend. Right off the trailer Kalitta ran to the provisional No. 1 spot after Friday’s lone qualifying session. The team earned three valuable qualifying bonus point but more importantly it set them up to run at the back of the pack the rest of the weekend.
“We left Reading super excited after our test session,” said Kalitta, a 49-time Top Fuel national event winner. “I am happy we came in here and made a good run in the first session. This would be an awesome time to start going rounds. I am an eternal optimist by nature and I have a great team behind me. My goal is to seize this opportunity. It is exciting to have a team like I have.”
His Friday quick run held up as one of the best times throughout Saturday with his Mac Tools team trying to find the competitive edge of zMax Dragway’s all-concrete racing surface. Coming into race day Kalitta was the No. 5 qualifier he was lined up against his teammate Shawn Langdon in an all-Kalitta Motorsports match-up.
Kalitta left right behind Langdon off the line and duo was locked together as the finish line closed in at over 325 mph. Kalitta was able to get the win with a quicker 3.710 second run and advance to the quarterfinals against Countdown competitor and No. 4 qualifier Mike Salinas.
The quarterfinal race was a clash between two of the toughest teams on the circuit, but it was Kalitta’s day to shine picking up his second win light with an impressive win by half a dragster length. His winning time of 3.696 seconds was also quick enough for lane choice in the semifinals.
Once again Kalitta was great off the starting line racing Justin Ashley, the current points leader, but his Mac Tools dragster smoked the tires while Ashley was on a problem-free pass to the finals. Kalitta attempted to pedal his race car, but he could not reel in Ashley. For his efforts on race day Kalitta earned two win lights which translated to 40,000 meals for Feeding America thanks to a four-race program that began this weekend in partnership with Kalitta Motorsports sponsor DHL. Throughout the month of September every win light by Kalitta Motorsports will mean a 20,000 meal donation to Feeding America.
“We didn’t get as many win lights today as we wanted for our Mac Tools team or Feeding America, but I am excited about our race day,” said Kalitta. “That second round run was huge and we know we can run with anyone. (Crew chiefs) Alan Johnson and Brian Husen tried some things after Indy and I think we will continue to see improvement. There are four more races in the Countdown and I am ready to get after it. I have the best crew out here. We are just going to keep banging away at it to get to those final rounds and get those wins.” 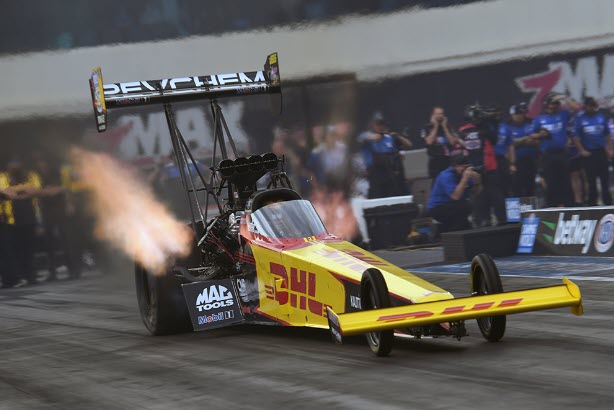 ​
Driving the DHL Toyota Top Fuel dragster with Kalittaair.com/Careers emblazoned on the side Shawn Langdon raced into the Carolina Nationals looking to rekindle some of their previous success. Langdon had won at zMax Dragway in Top Fuel and Funny Car and with the Countdown underway the 2013 Top Fuel champion was looking to make a move in the points. Through two days of qualifying Langdon battled to enter race day as the No. 12 qualifier in an extremely quick field. His best time of 3.746 seconds at 322.19 mph set him up with a tough first round race against teammate Doug Kalitta, the No. 5 qualifier, who after the first day of qualifying was the provisional No. 1 Top Fuel dragster.
On Sunday morning Langdon knew his best chance against the perennial championship contender was to get a jump off the starting line and make his best run of the weekend. The veteran driver who is recognized as one of the quickest drivers off the starting line took a starting line advantage with a .049 second light to Kalitta’s .058 second reaction time. As both 11,000-horsepower land rockets flew down the track they were side-by-side but Kalitta was able to get the nose of his dragster out in front.
In one of the closest races all day Kalitta advanced to the second round with a 3.710 second pass over Langdon’s 3.731 second run. It was Langdon’s best effort of the weekend, but it was not enough to get a win light for the DHL Toyota Top Fuel dragster. The margin of victory at the finish line was six feet with both dragsters running 327.19 mph.
“We hate to run a teammate that early in the day, but it was a really close race,” said Langdon, a two-time finalist in 2022. “Doug had a great run and my DHL guts stepped up like I knew they would. We are going to take the positives of that run and head to St. Louis in a few days.”
Starting on Friday Langdon and the DHL Toyota team will be able to work on their qualifying position and put themselves in position to grab win lights on Sunday. Through a program with primary sponsor DHL every time Langdon turns on a win light over the next three races 20,000 meals will be donated to Feeding America. 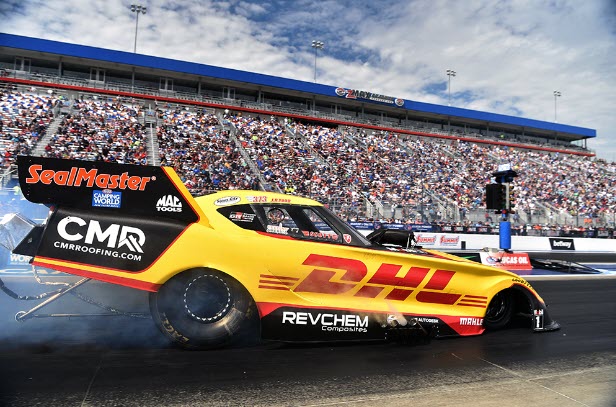 ​
J.R. Todd and the DHL Toyota GR Supra Funny Car rolled into zMax Dragway looking for their first career win at the track located in the heart of NASCAR country. In 2018 during his Funny Car championship season Todd raced to a runner-up finish and this weekend he was looking for one more win light. Four win lights today would have created the opportunity for Kalitta Motorsports and primary sponsor DHL to donate 80,000 meals to Feeding America. The two companies are collaborating during the month of September to donate 20,000 meals for every win light beginning this weekend and for the following three NHRA national events.
Through two days of qualifying Todd and the DHL Toyota GR Supra made solid runs with their two passes on Saturday earning him four qualifying bonus points as the second quickest run of each session. Heading into race day his quickest time of 3.873 seconds at 328.54 mph gave him lane choice over Toyota teammate Alexis DeJoria.
In the opening round today both Funny Cars rolled into the staging beams and it was Todd taking a starting line advantage with a .056 second reaction time in front of DeJoria’s .071 second start. As soon as his racecar left the starting line it began moving around and the 10-time Funny Car national event winner had his hands full. The loss of one cylinder robbed Todd of valuable horsepower and had Todd manhandling his race car down the track. DeJoria posted a career quickest pass to turn on the win light.
“After our qualifying runs we had a lot of confidence and we still feel like we can run with anyone out here,” said Todd. “We are going to get ready for St. Louis and make the most out of this first half of the Countdown. These DHL guys busting their tails. We just need to translate that effort to race day and I know we can do that.”
Todd and the DHL Toyota Funny Car team will be back on track at the NHRA Midwest Nationals at World Wide Technology Raceway out side of St. Louis in five days.

About Kalitta Motorsports:​
Based in Ypsilanti, Mich., Kalitta Motorsports is a Top Fuel and Funny Car drag racing team in the NHRA (National Hot Rod Association) Camping World Drag Racing Series. The team was founded and is owned by drag racing icon Connie “the Bounty Hunter” Kalitta. Celebrating over 60 years of Kalitta Motorsports, Connie has been involved in the sport as a driver, tuner, and an owner. Kalitta Motorsports is one of the most successful teams in the history of auto racing with seven world championships and over 100 national event titles in five different professional drag racing sanctioning bodies since it was established by Connie in 1959.