SONOMA, CA (July 21, 2021) --- Over a decade ago Justin Ashley shared the winner’s circle with Sonoma Nationals winner Antron Brown, moments after the now three-time world champion swept the Western Swing, having picked up wins in Denver, Seattle and Sonoma during the 2009 season. This year Ashley, the reigning NHRA Rookie of the Year, will be sharing the pits with Brown as well as a host of tough Top Fuel competitors as he races for his second career Top Fuel victory and his own Sonoma National winner’s circle. Ashley will be campaigning the Smart Sanitizer Top Fuel dragster powered by Strutmasters.com for the eighth time this season.
“The last time I was at Sonoma Raceway was 2009 when Antron swept the swing,” said Ashley, who is currently No. 9 in the Top Fuel point standings. “I am looking forward to going back as a driver and making some of my own memories. We have heard so many good things about this facility. I know it is a fast track and having Mike Green as my tuner has me super excited to get there and see what this Davis Motorsports Top Fuel dragster can do. This will be a home race for Davis Motorsports so having some extra family and friends at the track with us is an added bonus.”
The Western Swing began last weekend at the Mile-High Nationals at Bandimere Speedway and Ashley made the decision to skip the event opting instead to improve their race car and prepare for a daunting stretch to finish the regular season. It was a tough weekend for the second year driver who tried unsuccessfully to keep his mind occupied elsewhere. 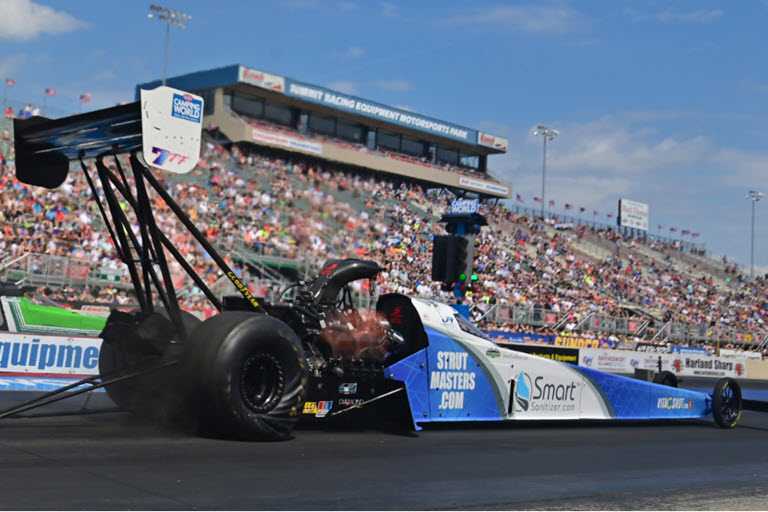 Justin Ashley, photo credit Ron Lewis Photography
​
“It was very difficult to not be at the race in Denver,” said Ashley. “I promised myself I wouldn’t watch but I couldn’t resist. I sat there on nhra.tv watching the race. It was tough but also it helped put a lot of things in perspective. I am fortunate to be able to go out on the NHRA tour racing as much as I am because of Smart Sanitizer, Strutmasters.com, Auto Shocker, KATO Fastening Systems and all of our awesome sponsors. This was a move that was in the best interest of our team long term when it comes to trying to make the Countdown. We have a long stretch here of consecutive races and we took this time to front half the race car. We got mentally and physically prepared for this stretch of races.”
Heading into the middle of the regular season with seven races behind him Ashley is looking forward to being in his race car almost every other weekend for the rest of the season. The number of races he will compete in will be a record high for the young driver and he is doing his best to prepare for the new experience.
“I have never had the opportunity to race as many races as we are this season,” said Ashley, who last season competed in all eleven national events. “It’s a dream come true, and I am very grateful for the opportunity to do this. You cannot buy experience, but I am doing everything I can to best prepare for this stretch. The team is doing just the same, working extremely hard in the shop to make sure we have a fast race car. We are excited and up for the challenge.”
The season started on a high note for the Smart Sanitizer Top Fuel dragster powered by Strutmasters.com racing to the semifinal round at the historic Gatornationals. Ashley has qualified for all the events and won rounds, but he is looking to make an impact over the final two races of the Western Swing in Sonoma and Pomona. Qualifying will begin on Friday night and continue with two sessions on Saturday. Final eliminations will begin at 11 a.m. and the race will be broadcast on FS1 from 4 p.m. – 7 p.m. ET. Fans can follow Justin Ashley Racing on Twitter, Instagram and Facebook.

Justin Ashley Returns to Winternationals to Wrap Up Western Swing

SOLID OPENING ROUND NOT ENOUGH FOR ASHLEY IN SONOMA

JUSTIN ASHLEY RACES TO QUARTERFINALS AND INTO COUNTDOWN