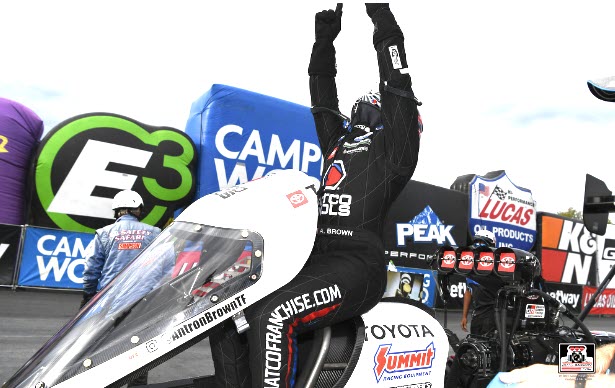 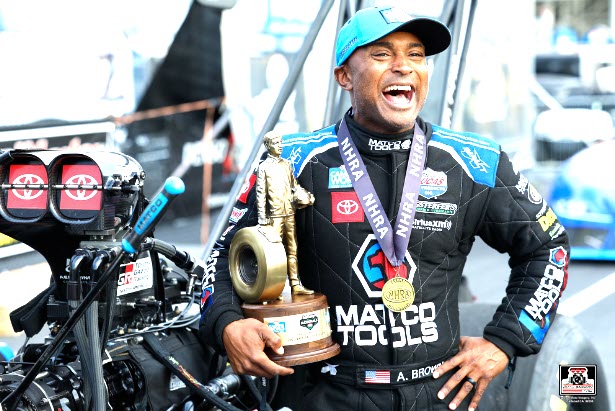 Qualified: No. 7 (3.705 E.T. at 326.08 MPH)
Elimination Round Results:
E1: 3.691 E.T. at 331.20 MPH defeated Austin Prock 3.778 E.T. at 328.14 MPH
E2: 3.733 E.T. at 287.23 MPH defeated Brittany Force 5.252 E.T. at 161.48 MPH
E3: 3.687 E.T. at 325.14 MPH defeated Clay Millican 3.699 E.T. at 331.20 MPH
E4: 3.672 E.T. at 335.73 MPH defeated Justin Ashley 3.671 E.T. at 333.99 MPH​
CONCORD, N.C. (Sept. 25, 2022) – For the second time in the last three races on the NHRA Camping World Series tour, three-time world champion Antron Brown raced to victory in his Matco Tools Top Fuel dragster. Racing at the Betway NHRA Carolina Nationals at zMAX Dragway, Brown defeated technical alliance teammate Justin Ashley in the final round to move up to second in the Countdown to the Championship points.
Qualifying No. 7 with a 3.705 at 326.08-mph, Brown carried lane choice into what NHRA declared the Top Fuel marquee matchup of the first round, where he lined up against Rookie of the Year Austin Prock. In a rematch of the semifinals at Reading just a week ago, Prock took the early lead, but Brown drove past him to win with a 3.691 at 331.20.
In the second round, it was a battle between the previously No. 2 ranked Brittany Force vs. the No. 4 ranked Brown. Force went up in smoke early, and while Brown had his own issues mixing up cylinders down track, he managed a 3.733 E.T. at 287.23-mph for the win. Brown added to his round-win record against Force this season, going 2-0 in the Countdown and 5-0 over the course of their previous five elimination meetings.
A sizable starting line advantage put Brown ahead of Clay Millican in the semifinals, and a 3.687 kept him ahead of Millican and his 3.699-second effort. That sent Brown to the final round for the 129th time in his career, and the third time in the last five races.
The U.S. Nationals winner faced off against the points leader and No. 1 qualifier, Ashley, in the final round. Brown took a .020 starting line advantage, then powered the Matco Tools machine to a 3.672 at 335.73 to finish ahead of Ashley and his 3.671 at 333.99. It was a win-win final round for Brown’s AB Motorsports and Ashley’s Davis Motorsports teams, as they share technical and marketing resources.
“When we got to that final, we just went up there and went, 'This is fun,' because we won as a team, a collective group,” said Brown, who’s now tied for a record six Top Fuel wins at zMAX Dragway. “(Ashley’s team) is on one side of the Lucas Oil hospitality area, we're on the other side. We push each other all the time. Me and Justin knew we were going to give it everything we had on that starting line.”
Brown dedicated the win to the late Abbie Bucher, the daughter of part-time Top Fuel driver and friend of the team, Mike Bucher. Abbie lost her battle with leukemia in the days leading up to the Carolina Nationals, and Brown’s team was motivated to win in her memory.
“When you think about all that together, there's so much more to drag racing,” Brown said. “It's the story of all the families that we have in this sport and how we come together. It's such a sad story. It was weighing on the hearts of this whole team. It's what makes this sport so special. It's not just winning, it's how we take it together and we win life together. Lord knows that win is for the whole Bucher family. She's looking down on us and she's smiling because she was definitely an angel in the pits, little Abbie.”
After defeating Ashley in the final round, Brown moved to just 43 points out of the championship points lead currently held by Ashley. Brown realizes his own technical alliance teammate is going to be his fiercest rival in the fight for the 2022 world championship.
“If we want to compete for this championship, we have to step up,” Brown said. “When I look at Justin, he's the toughest competitor out there, period, hands down. He spits out .040s and .030s and .025s on the tree. It ain't guessing. The kid is laser sharp and his focus is unreal.”
But Brown is confident in his team’s ability to contend for his fourth Top Fuel title and the first for AB Motorsports. He credits co-crew chiefs Brian Corradi and Mark Oswald, who he called the team’s ‘Batman and Robin,’ car chief Brad Mason, and the whole Matco Tools team for working together to accomplish the group’s goals.
“It takes everybody,” Brown said. “We've got nothing but strong links. When one of us falters, everybody picks each other up. That's when you have something special, and that's what AB Motorsports has right now. It starts at the top and trickles down.”
Brown and his AB Motorsports team will chase their fourth win of the season in less than a week at the NHRA Midwest Nationals, Sept. 30-Oct. 2, at World Wide Technology Raceway near St. Louis.

About AB Motorsports​
Established in 2019 and making its on-track debut in 2022, AB Motorsports is a single-car NHRA Top Fuel team owned and operated by three-time world champion Antron Brown. Headquartered in Brownsburg, Ind., the team competes on the 22-race NHRA Camping World Drag Racing Series circuit thanks to the support of Matco Tools, Lucas Oil, Toyota, SiriusXM, Hangsterfer’s Metal Working Lubricants, and Summit Racing Equipment.
Brown, who serves as both the owner and driver of the AB Motorsports Top Fuel dragster, is the only competitor in NHRA history to have won races in both the Top Fuel and Pro Stock Motorcycle categories. Brown is a 71-time NHRA national event winner and became the first Black driver to win a major U.S. auto racing championship when he captured the 2012 NHRA Top Fuel series title.