TORRENCE BACK TO HIS PERSONAL ‘OASIS’ (1 Viewer)

TORRENCE BACK TO HIS PERSONAL ‘OASIS’
Four-Time World Champ Aims to Build on Past Success at ZMax Dragway​
CHARLOTTE, N.C. – As defined by Mirriam-Webster, an oasis, in addition to being “a fertile or green area in an arid region” can be anything “that provides refuge, relief or pleasant contrast.”
For four-time reigning Top Fuel World Champion Steve Torrence and his Capco Contractors team, that oasis is ZMax Dragway, site this week of the 14th Betway Carolina Nationals, second race in the NHRA’s Countdown to the Championship. 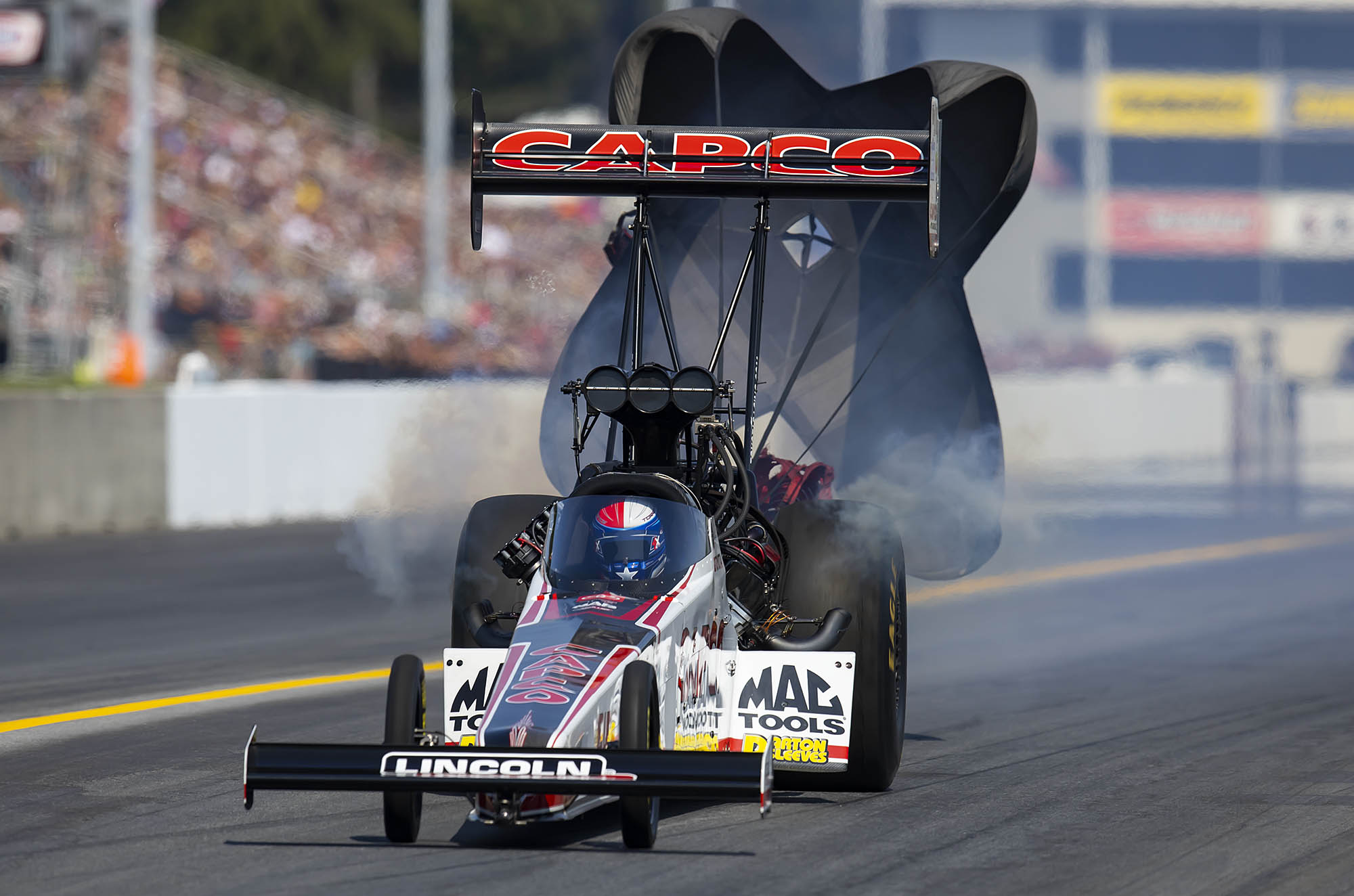 Photos by Mark Rebilas
Steve Torrence deploys the parachutes to slow his Capco Contractors Top Fuel dragster from 330 miles per hour last week at Reading, Pa. Torrence returns to action this weekend in the 14th Betway Carolina Nationals in which he will be trying to win for the seventh time in his last 10 starts at ZMax Dragway.
​
Poised this year to become just the fourth pro driver in NHRA history to win as many as five straight series championships, Torrence is thirsting for the kind of performance that could negate the 56-point deficit with which he will begin qualifying on Friday.
Relief certainly could come on the all-concrete surface on which he has won six times in his last nine appearances while compiling a 23-3 round record.
“The longer you’re on top, the harder it is to stay there,” Torrence said of his situation, “but I’m a very competitive person and so are these Capco Boys. We’re a little further down (in points) than we’d like to be but we’ve had a lot of success at Charlotte and we’re coming in with a car that’s showing a lot more consistency.”
Further cause for optimism is the competitive return of the second Top Fuel Toyota driven by Capco founder and CEO Billy Torrence, an eight-time pro tour winner who sat out last week’s Countdown opener at Reading, Pa. 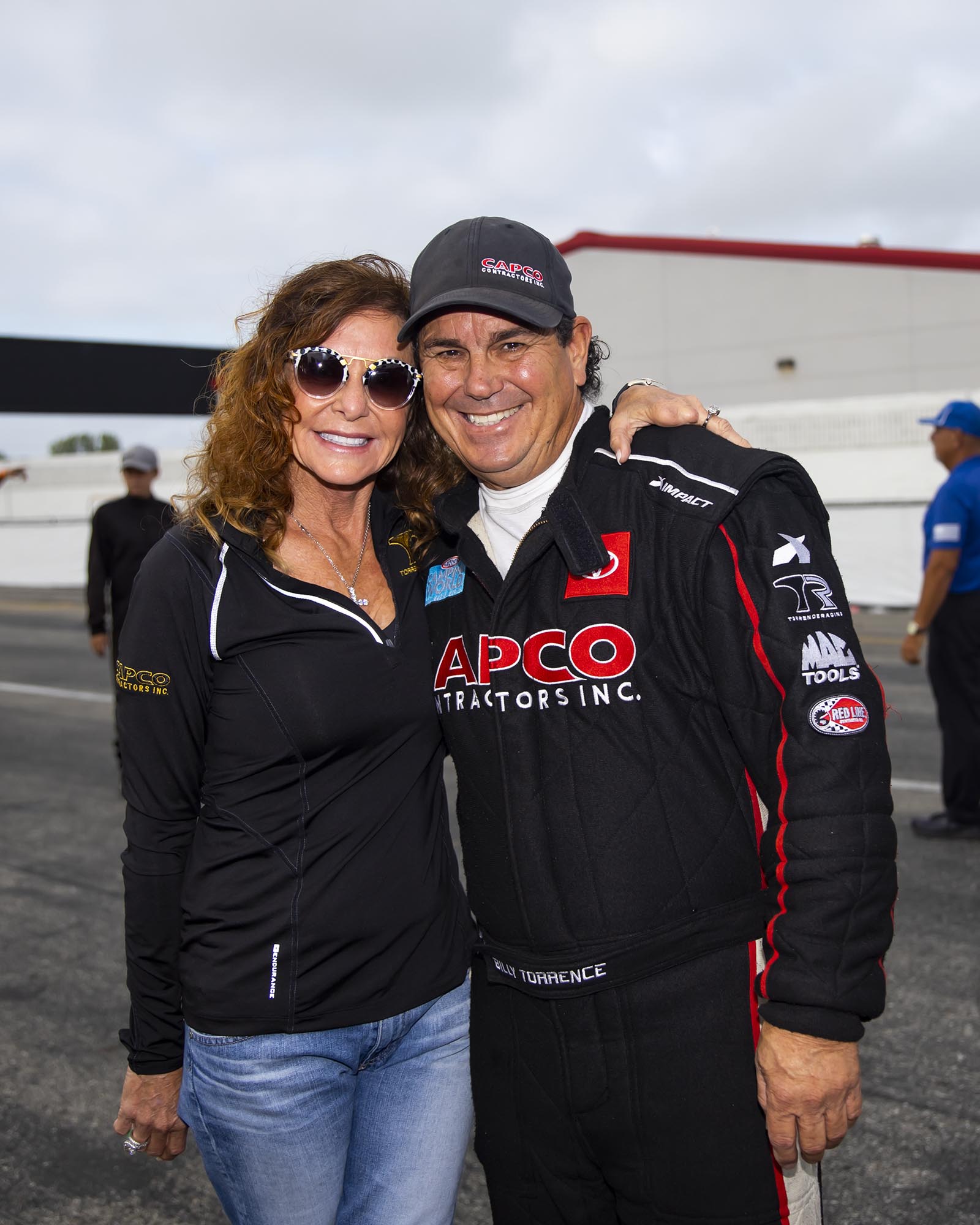 Momma Kay Torrence, left, will have have two cars to manage at this week's Betway Carolina Nationals where husband Billy, right, will return to the cockpit of the second Capco Contractors dragster to support son Steve's bid for a fifth straight Top Fuel World Championship.​
“It’s always better when my dad’s racing,” the younger Torrence said. “We’ve been racing together since I was just a kid. It’s something we’ve always done as a family. The only thing that’s changed is the size of the family. Now, in addition to my dad and Momma Kay, we’ve got an extended family of Capco Boys plus (my wife) Natalie and (daughter) Haven Charli.”
After winning 44 of 97 starts from 2017 through 2021, the younger Torrence has put up far less spectacular numbers this year while crew chiefs Richard Hogan and Bobby Lagana Jr. have worked to implement a new set-up designed to mollify the performance advantage enjoyed by regular season champion Brittany Force.
“It was necessary,” the 39-year-old cancer survivor said of the change. “You can’t sit still in this sport. You can’t rest on past results. You have to get quicker; you have to get faster.”
Qualifying begins with a single nitro session at 6 p.m., Texas time, Friday followed by sessions at 1:15 and 5 p.m., Texas time, Saturday. Sunday eliminations begin at 11 a.m., Texas time.
FS1 television coverage will include qualifying highlights at 6 p.m., Texas time, on Friday, and 1 p.m., Texas time, Sunday followed immediately by eliminations beginning at 2 p.m., Texas time. Finals will re-air Sunday at 10 p.m., Texas time. 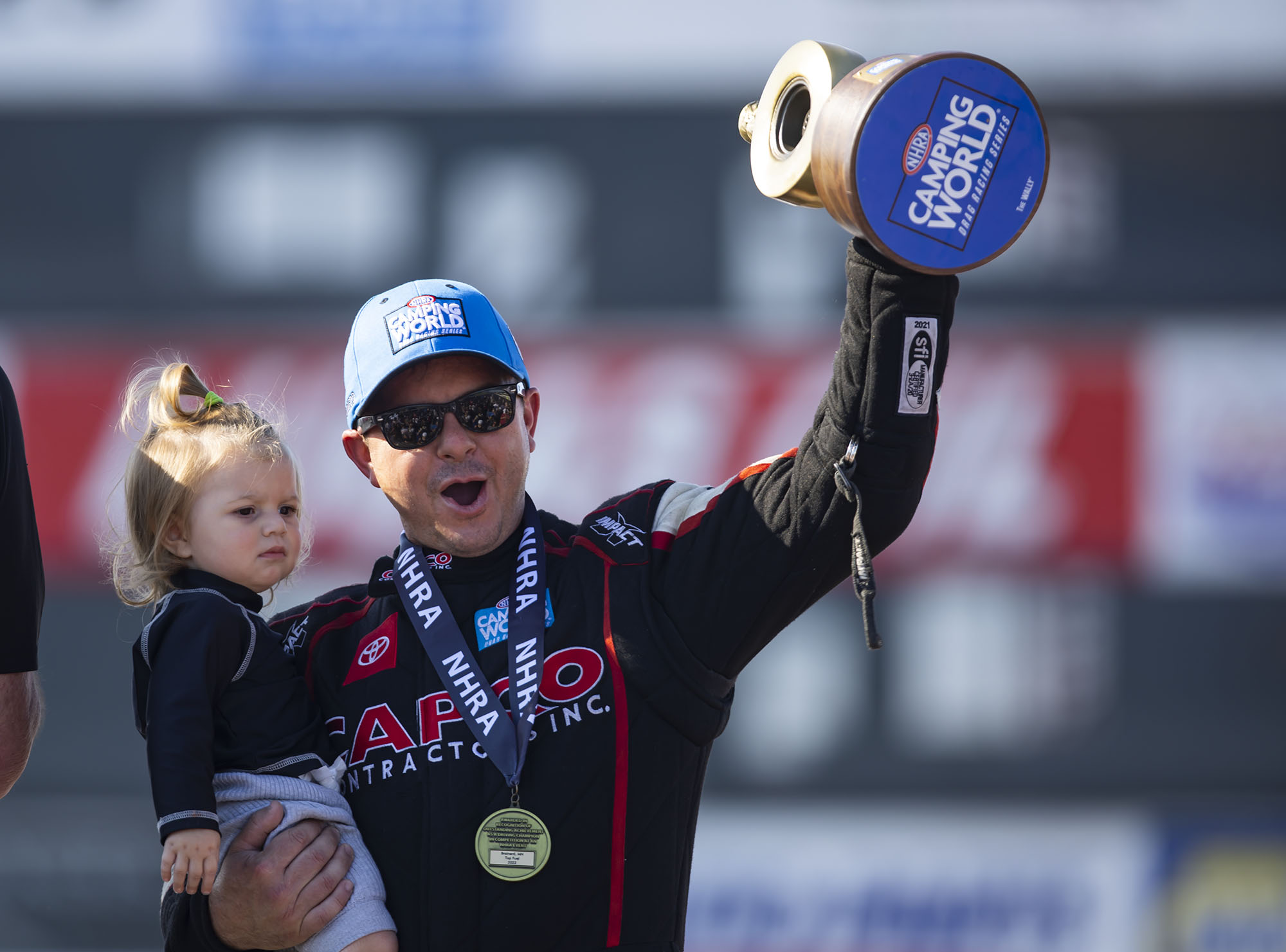 Four-time reigning Top Fuel World Champion Steve Torrence will be looking for another victory celebration with daughter Haven Charli at this week's Betway Carolina Nationals at Charlotte.​
About Toyota ​
Toyota (NYSE:TM) has been a part of the cultural fabric in North America for more than 60 years, and is committed to advancing sustainable, next-generation mobility through our Toyota and Lexus brands, plus our more than 1,800 dealerships.
Toyota directly employs more than 48,000 people in North America who have contributed to the design, engineering, and assembly of nearly 43 million cars and trucks at our 13 manufacturing plants. By 2025, Toyota’s 14th plant in North Carolina will begin to manufacture automotive batteries for electrified vehicles. With more electrified vehicles on the road than any other automaker, more than a quarter of the company’s 2021 North American sales were electrified.
Through the Start Your Impossible campaign, Toyota highlights the way it partners with community, civic, academic and governmental organizations to address our society’s most pressing mobility challenges. We believe that when people are free to move, anything is possible. For more information about Toyota, visit www.ToyotaNewsroom.com.

About Capco Contractors Inc.​
Capco Contractors, Inc. is a family owned-and-operated construction company specializing in the oil and gas industries. A proud American company based in Texas with clients around the world, Capco was founded in 1995 by Billy Torrence and initially operated from a small office and one job-site trailer with a staff of only 12 employees. From those humble beginnings, Capco Contactors, Inc. has developed into a full-service pipeline company, capable of all aspects of pipeline work including site work, creation of compressor stations, mainline pipeline construction and pipeline integrity projects. It employs more than 200 people with main offices in Henderson, Texas.

TORRENCE AFTER ANOTHER 4WIDE WIN

TORRENCE STARTS HIS ‘DRIVE FOR FIVE’