TJ Zizzo, driver of the Rust-Oleum Rocket Top Fuel dragster, competes throughout the year in the National Hot Rod Association (NHRA) on the Camping World Drag Racing Series tour. Zizzo, owns Zizzo Auto Body in Lincolnshire, Illinois and competes at the highest level when his schedule allows. Last season he was runner-up at the NHRA Summernationals in Indianapolis and in 2021 he will be competing at two national events in Brainerd, Minnesota and St. Louis, Missouri, respectively. Both races will be televised nationally on FS1. TJ took some time before he hit the road to the NHRA Lucas Oil Nationals in Brainerd, August 20-22 to provide an update on the past ten months.

Q: It has been almost a year since you last raced, how excited are you to get back in the Rust-Oleum Rocket Top Fuel dragster?
TJ: “I am jacked. As we get closer to that date of competition I get more and more excited. I actually start dreaming about it. The guys in the body shop know the week of a race that I am not mentally going to be with them. They know I will be thinking of all things racing. Also, the excitement is building because to celebrate 100 years with Rust-Oleum this year will make finally getting to Brainerd really special.”

Q: Your racing operation is competing at the highest level with the NHRA but your team also has a family atmosphere with your dad being very involved. How much fun is it to have your father, Tony Zizzo, at the races with you?
TJ: “To be with my dad on a daily basis is great and I think I spend more time with him than I do with my family or friends, it is a way of life here. We work together every day. I climb into that semitrailer and drive to a race with my dad because we get that time together. I also realize he is 70 years old this year and I cherish every minute we are together. The drive to the races is just the two of us for hours at a time and we get to talk about all sorts of things. We work together 365 days a year, but we don't have a lot of time at the shop to talk because we are both hard at work”

Q: You have been representing Rust-Oleum and many great partners for years. What does their support mean to you and how do you think they benefit from participating in the NHRA?
TJ: “For Rust-Oleum to want to celebrate 100 years on our race car on the NHRA series says a lot. They are excited about it and we are going to rally around and celebrate with a painting by Kenny Youngblood of the Rust-Oleum paint scheme. To have support from any corporation is awesome but we have been fortunate to have support from major corporations that see the value in NHRA and our marketing relationships. It is about reaching the right demographics, it is about what Rust-Oleum sees in our team and our relationship and this is a marketing partnership. We work with Rust-Oleum every day in our body shop and are doing something fun, creative or educational all the time. It has been a wonderful ride and for them to put faith and effort into our race team for the next five years is tremendous.” 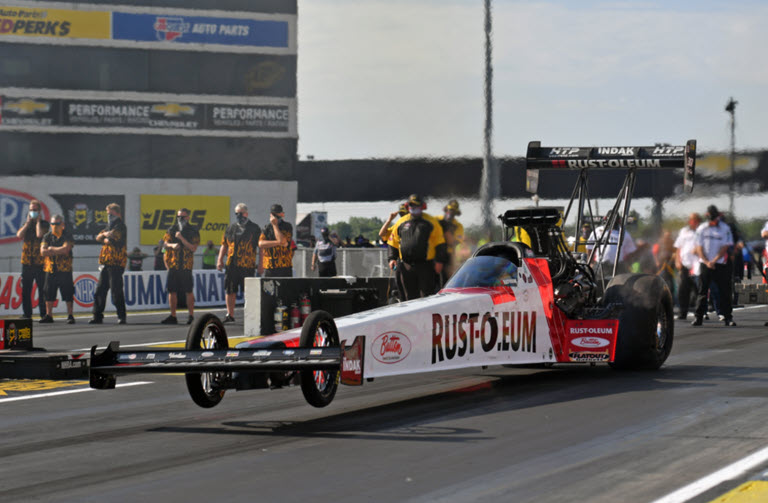 TJ Zizzo and Rust-Oleum Top Fuel Dragster Indianapolis, IN (photo credit Auto Imagery)​
Q: Brainerd will be your first race of 2021, what are your expectations?
TJ: “Our expectation, which is a little weather dependent, is to come out of the trailer running as strong as we were last season. We ran three 3.75 second passes in a row in St Louis. We were one of the most competitive cars at the race that weekend. The goal is to come out of the trailer and start where we left off. Just because we aren’t racing every weekend doesn’t mean we are not thinking about winning. Our entire team has poured effort over the last ten months and thousands of hours of effort into making our team better. We have never stopped. Just because we are not at the race track doesn’t mean we aren’t learning something. The expectation is to win, period.”

Q: You have added world championship crew chief Rahn Tobler to your team, how much additional confidence does that give you?
TJ: “Rahn and I have been friends off the race track for over fifteen years. He is excited to be involved with our team. He knows our entire team. He is not coming into unfamiliar territory. He sat back when we went to the final round in Indy and he just watched us work. He said your team is just as good as our NAPA Funny Car team which he was tuning at the time. At that point I think that sparked his interest even more since he saw firsthand how serious we were. He knew it but seeing it was just as important. Adding Rahn is about bringing some additional confidence to our entire team. Mike Kern still leads our team. He is still our crew chief and Rahn is going to come in and allow Mike to not be out on an island. Mike bounces ideas off of me and Tony Smith our long-time clutch specialist, which is great but when he can bounce ideas off a world championship winning crew chief that will get us to the next level.

Q: What do you love the most about racing at over 330 mph in under four seconds?
TJ: “Of course everyone knows the adrenaline. I am a competitive person by nature. There is nothing more exciting than getting business from another body shop. There is nothing better than turning on win lights and beating a competitor. There is nothing better than having that feeling when you are hitting speeds over 330 mph. If I could put my foot to the floor in that Rust-Oleum Top Fuel dragster for four miles I would. Ultimately, it is the people that really get me excited. I have met some wonderful people through the sport of drag racing.”

Zizzo, Rust-Oleum Team, Shake the World (And Tires) in Return to Track

Zizzo Honored to Rep Rust-Oleum at the Big Go