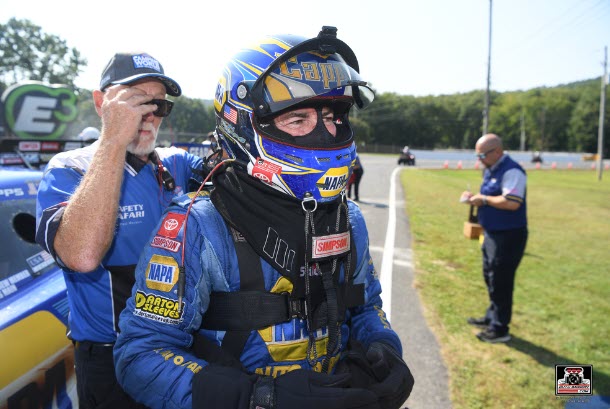 Countdown to the Championship Ranking: 3rd
Charlotte II Event Highlights:
Two-time event champion (2012, 2018)
2021 Charlotte II Recap:
Qualified fifth; Semifinal finish (defeated Jim Campbell in E1, Matt Hagan in E2; defeated by Tim Wilkerson in E3)
Last Event (Reading):
Qualified second; Quarterfinal finish (defeated Phil Burkhart Jr. in E1; defeated by Tim Wilkerson in E2)
Career Statistics:
603 races; 71 wins; 34 No. 1 qualifiers
2022 Statistics:
17 races; three wins; two runner-up finishes; five No. 1 qualifiers​
Noteworthy:
Capps is 84 points out of first, and will be looking to narrow the deficit as he pursues his second consecutive Funny Car title, third overall, and first for Ron Capps Motorsports
The second-winningest Funny Car driver of all time has victories from Las Vegas, Bristol, and Indianapolis in 2022
Quotable:
“I think everybody can take a deep breath now that we’ve got one race under our belts with the Countdown. Obviously, a lot of emotions go into racing all season long and having the points reset, and then it all comes down to battling it out for six races.
“We had an unbelievable NAPA AutoCare car in Maple Grove, qualified No. 2 and then ran low E.T. of the weekend in the first round. Of course, second round was disappointing but there’s good news along with the bad news. The good news is, we know why it smoked the tires, and the great news is, we’re going to a fantastic race track like zMAX. We love going there for the Four-Wides, we love racing there in the Countdown, and it just takes a lot of the guesswork out for these crew chiefs when you go up there and know it’s going to be a great race track surface. Same for the drivers; we can focus on trying to do the best we can with keeping the car in the groove. I’m excited, I’m glad we get to go right back at it with these three races in a row, and to be sandwiched here in between Reading and St. Louis, I couldn’t think of a better place to go, and we’ll see if we can’t climb ourselves back into the top spot in the points.”

About Ron Capps Motorsports​
Established in 2021, Ron Capps Motorsports is a single-car NHRA Funny Car team owned and operated by reigning and two-time world champion Ron Capps. Headquartered in Brownsburg, Ind., the team made its on-track debut in 2022, and competes on the 22-race NHRA Camping World Drag Racing Series circuit thanks to the support of NAPA AUTO PARTS, Toyota, and GearWrench.
Capps, who serves as both the owner and driver of his namesake operation, is the second-winningest Funny Car pilot in NHRA history with 70 wins in the category, and 71 overall (1 Top Fuel). The 2022 NHRA season marks Capps’ 28th year competing in the sport’s professional ranks.