Event 9: 2021 NHRA Sonoma Nationals
Sonoma Raceway
Sonoma, CA
July 23-25, 2021
Team Kalitta sits fourth in Funny Car and fifth and seventh in Top Fuel in the point standings. Doug Kalitta and Shawn Langdon will be racing to see who can secure their second Top Fuel title at the NHRA Norwalk Nationals and J.R. Todd will be looking for Funny Car win number two of 2021

For Shawn Langdon and the DHL Kalitta Air Top Fuel team racing in Northern California is a welcome challenge. The sea level conditions create the perfect opportunity for legendary team owner, driver and crew chief Connie Kalitta to get aggressive with a tune-up and for Langdon to show his skills on the race track. In 2013 when Langdon won his Top Fuel world championship the Sonoma Nationals was an event he added to the win column and the following season he returned to post a runner-up finish. Continued success in Sonoma is something Langdon is looking for as the Western Swing makes its second stop.
“It would be nice to win there. It is always a fun race and I enjoying heading to Sonoma,” said Langdon.
The last time Langdon was on track at Sonoma Raceway he was sitting behind the 11,000 horsepower motor racing a Toyota Camry Funny Car. He qualified No. 2 and raced to the quarterfinals in 2019. Returning to his roots of sitting in front of the motor in a Top Fuel dragster has Langdon comfortable and eager for more wins. The reigning U.S. Nationals champion and 2021 Gatornationals runner-up understands how tough wins are to come by.
“There are a lot of good race cars at every NHRA national event,” said Langdon. “There are no easy round wins and anyone can lose in the first round. Our goal is to qualifying as high on the ladder as possible and then turn on four win lights on Sunday. I am looking forward to getting on track this weekend in Sonoma.”
The DHL Top Fuel dragster recently raced to the semifinals in Houston at the Springnationals and Langdon hopes some of that positive experience will carry over to Sonoma this weekend.
“We are back at sea level and we can create a ton of power with our DHL Top Fuel dragster,” said Langdon. “Getting to drive for Connie is a huge honor and I just want to be at the top of my game every time I pull up to the starting line.”
Qualifying will begin at the Sonoma Nationals on Friday, July 23, with an evening qualifying session which is sure to produce low elapsed times and high speeds. Two sessions will follow on Saturday with final eliminations beginning Sunday morning at 11 a.m. local time. The race will be broadcast on FS1 from 4:00 p.m. - 7:00 p.m. ET.
2019 NHRA Sonoma Nationals Highlights (event not contested in 2020): In Funny Car, Qual. No. 2; Beat Terry Haddock; Lost to John Force
Last Event Recap (2021 NHRA Mile-High Nationals): Qual. No. 8; Lost to Clay Millican
Career Stats: 275 events, 272 starts, 305 round wins, 17 wins, 35 finals, 19 No. 1 qualifiers; in Top Fuel: 227 events, 224 starts, 15 wins, 32 finals, 266 round wins, 19 No. 1 qualifiers 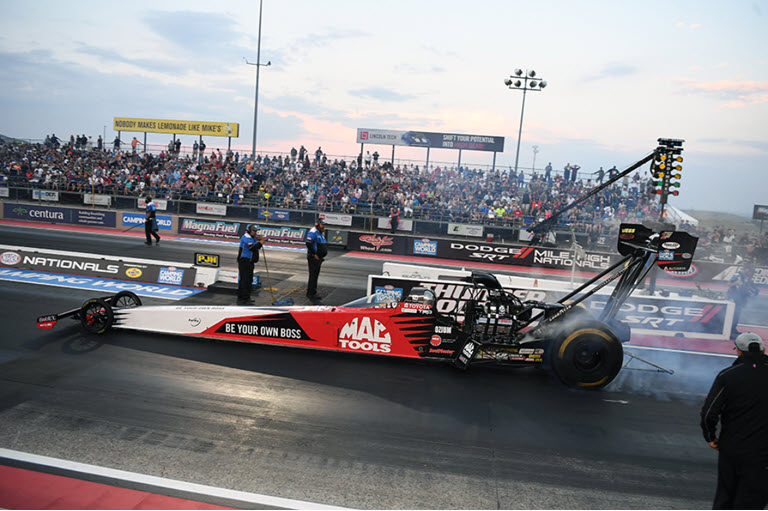 ​
When Doug Kalitta and the Mac Tools Top Fuel team roll into Sonoma Raceway for this weekend’s Sonoma Nationals it will be a welcome stop for the perennial NHRA Top Fuel championship contender. Kalitta is looking for his 50th career Top Fuel win and the friendly confines of the beautiful track located in the heart of wine country could be just the location for him to jump back into the winner’s circle. It has been two years since any NHRA teams flew down the race track in Sonoma and all the competitors are eager to get back on one of the fastest and quickest tracks on the tour.
Kalitta is the winningest Top Fuel driver in Sonoma Raceway history with five wins and six final round appearances. It has been some time since he hoisted the winner’s trophy but that does not take away from his streak of dominance that began in 1998 and led to three consecutive victories and then back-to-back wins in 2004 and 2005. A 2002 runner-up finish was bracketed in the middle of those two streaks.
“It has been a little while since I have won the Sonoma Nationals,” said Kalitta, in advance of the Western Swing. “I have had great success there and I am real hungry to get another win there for sure. It will be fun to get back up there and I think we have the race car to get the job done.”
This season Kalitta has raced to two runner-up finishes and a handful of quarterfinal finishes. Race day success is the goal for Kalitta as his Mac Tools team takes on the second race of the three races in three weekends swing.
“We didn’t get the win in Denver but that is a whole different ballgame up on the mountain,” said Kalitta. “We are down at sea level in Sonoma and Friday night could be a really quick session. We will be ready to give it our best for sure.”
The team has been working to find the consistency that led them to strong finishes the past two seasons and has the veteran chasing his first Top Fuel championship. As the season moves to the halfway mark the 49-time Top Fuel national event winner knows getting momentum will be a key ingredient to success.
“I have a lot of confidence in these Mac Tools guys,” said Kalitta. “We have been battling together for a long time and we know what we need to do to win. I think we are getting in position to string some success together and I would like to start this weekend in Sonoma.” 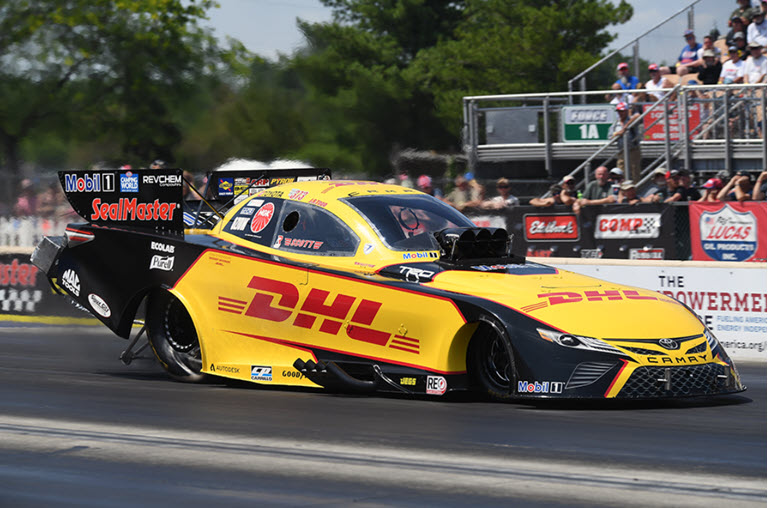 Only one other NHRA driver has enjoyed as much success at Sonoma Raceway as J.R. Todd when it comes to winning in Top Fuel and Funny Car at the Sonoma Nationals. Todd picked up two Top Fuel titles, winning in 2006 and 2016, and then added a Funny Car win in 2017 to join legendary driver Don “The Snake” Prudhomme, 1989 Funny Car winner and 1992 Top Fuel winner as the only two Nitro double-up winners. This year Todd and the DHL Toyota Camry team will be looking to add his second Funny Car win at the track and of the season with a win on Sunday in front of a packed set of grandstands.
“I am excited about the track being at 100 percent capacity,” said Todd. “I saw the news and that is what we need. A lot of the races we have been to so far this year they seem to be close to full capacity knowing that place can have full capacity I guarantee it will close to if not a sold-out crowd. That is awesome for NHRA and drag racing.”
The return to Northern California is also a welcome addition to Todd who missed racing at the track in 2020 when the race was cancelled due to the pandemic. With over two years between events the 2018 Funny Car world champion is eager to get back to one of his favorite race tracks.
“I have had a lot of success there,” said Todd. “Sonoma is one of my favorite tracks on tour for numerous reasons. The staff does an amazing job. It is wine country and it is my friend Eric Medlen’s home race. I have lots of good memories there and any time I do well there that is who I think about.”
Two final round appearances this season have yielded a season opening win at the Gatornationals and runner-up finish at the Charlotte Four-Wide Nationals. In addition to those two strong races Todd and the DHL team have raced to an additional semifinal race. The team has only been ousted in the first round one time in eight races and their consistency has them sitting in the No. 4 spot in the Funny Car point standings just over three rounds out of second place.