Starting from the pole for the second time in 2021, Ron Capps advanced to the semifinals and moved up one spot to fifth in the Funny Car point standings
No. 2 ranked Top Fuel pilot Antron Brown raced to his fifth semifinal appearance of the season at Matco Tools’ home track
Matt Hagan and Leah Pruett earned a bid to the quarterfinals, with Pruett moving up two positions on the Top Fuel leaderboard 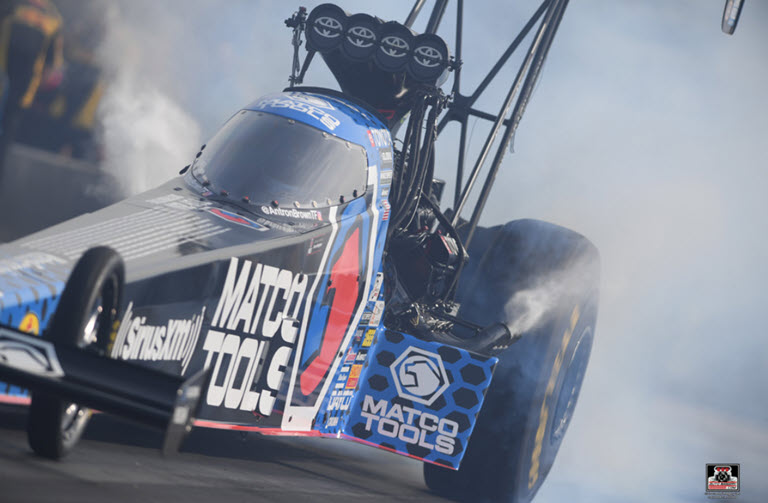 Race Recap:
Antron Brown and the Matco Tools/Toyota Top Fuel team delivered a solid performance at the NHRA Norwalk Nationals, advancing to the semifinals on Matco’s home turf. For the sixth consecutive event, Brown started race day from the ‘quick half’ of the field. After qualifying sixth, the 2014 event champion faced fellow racing veteran and championship contender Doug Kalitta in the first pairing during round one of race day. Crew chief Brian Corradi, a native Ohioan, tuned the Matco machine to a 3.767, which held up to be low E.T. of the round, setting off the very first win light of race day at his hometown event. Against his round two opponent, Brown had the starting line advantage and never trailed for the win, clocking a 3.783 E.T. to Billy Torrence’s 3.793-second pass. During Brown’s semifinal appearance, his fifth in seven events, he had the holeshot advantage once again, but his respectable 3.765 was no match for Brittany Force’s track record-setting 3.696, ending Brown’s day at the semis.
Quotable:
“We feel really good about where we’re at right now. We just have to keep working on what we’re doing. We’re moving forward and making this program better for our Matco Tools car. We knew ‘Grubby’ (David Grubnic) was going to throw down, but we didn’t think he was going to throw down that hard, and we took the L in the semis. We will hold our heads up and get ready for Denver in a few weeks and work harder to make this program better up to the U.S. Nationals in Indy. We know that’s where we need to turn the corner and run those high 60s and low 70s to get the job done in the Countdown this fall. It was a good weekend at Matco’s home track and a decent points day.” 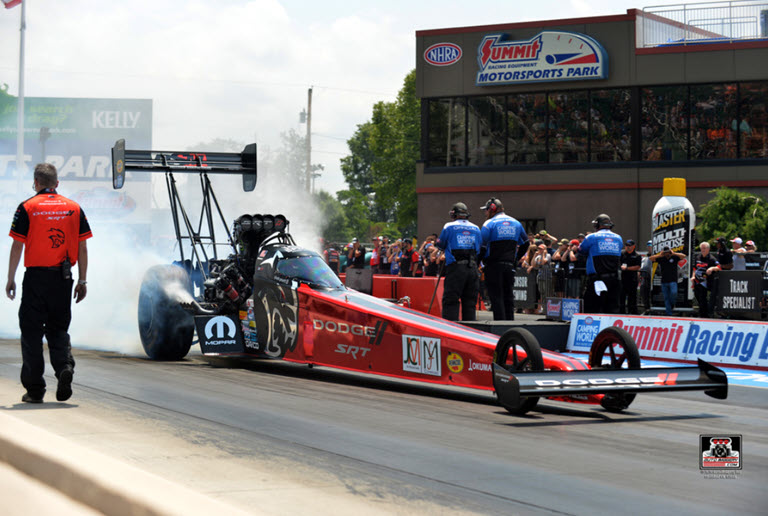 ​
Qualified: No. 8 (3.817 E.T. at 314.90 MPH)
The Results:
E1: 3.800 E.T. at 321.58 MPH defeated Doug Foley 4.642 E.T. at 162.76 MPH
E2: 3.772 E.T. at 326.95 MPH defeated by Steve Torrence 3.781 E.T. at 325.45 MPH
Race Recap:
For the sixth time in the first seven races of the 2021 season, Leah Pruett earned a qualifying position in the top half of the field. Starting from the No. 8 seed, Pruett faced Doug Foley in the opening round of eliminations. Pruett left the starting line first and never trailed for the win, clocking a 3.800 E.T. in her Mopar Dodge//SRT Top Fueler to improve upon her best qualifying run and secure lane choice against Steve Torrence in the second round. Pruett and Torrence pulled up for round two, ready to battle, but shortly after completing their burnouts, the skies opened up, and it started to rain. The two teams were forced to shut off, and opted to return to their race pits to quickly change clutch packs and regroup. Once racing resumed, Pruett powered her machine to a solid 3.772-second pass but narrowly missed a bid to the semifinals when Torrence’s holeshot advantage enabled him to claim the round win.
Quotable:
“I’d like to dedicate this Sunday at the NHRA Norwalk Nationals to my Dodge team. They did a phenomenal job of recouping after not having data from our Q3 run. We went out E1 and were solid, running a .80 flat. And then, sometimes the drag racing Gods give you that extra shot in the arm of adrenaline, and that’s from lining up against point leader Steve Torrence, doing a burnout, backing up, and then being told to shut down. Then an array of decisions needed to be made as to whether we should go back and fuel up, and change the clutch or not. These are not things that commonly happen, maybe every few years, and this team did a phenomenal job of servicing the car as much as we could. We went back up there and laid down a 3.77. For us, attitude is optimally maintained. We had a high attitude given our series of bad events, and because of that, we were able to come out of it. Now, did we come out of it on the good side of a good drag race? No, we didn’t, but we’re making ground, and we’re progressing, and as we continue to climb this mountain, and as we head to the Dodge//SRT Mile-High Nationals in Denver, we will continue on this upward rise. Heads are not low, they’re high, and I’m just very proud of my team.” 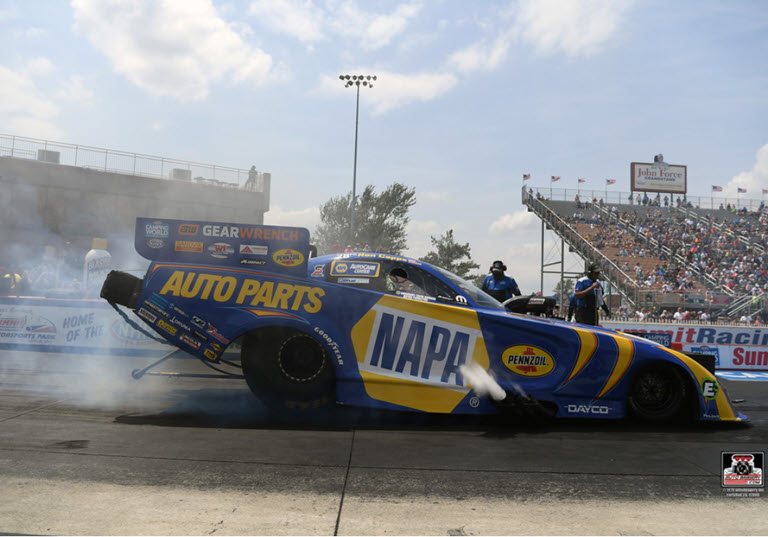 ​
Qualified: No. 1 (3.888 E.T. at 329.34 MPH)
The Results:
E1: 3.949 E.T. at 324.05 MPH defeated Terry Haddock 5.024 E.T. at 159.38 MPH
E2: 4.015 E.T. at 322.04 MPH defeated J.R. Todd 9.087 E.T. at 86.85 MPH
E3: 4.013 E.T. at 324.98 MPH defeated by Bob Tasca 3.924 E.T. at 330/39 MPH
Race Recap:
Ron Capps and the NAPA AUTO PARTS Funny Car team have been quick and consistent all season, and they maintained their ‘class best’ qualifying average at the NHRA Norwalk Nationals by earning the coveted No. 1 qualifying spot. Starting from the pole for the 27th time in his career and second time in 2021, Capps faced No. 16 qualifier Terry Haddock in round one. Capps drew Haddock at the previous event (Epping, N.H.) where he suffered a frustrating E1 upset loss and was seeking redemption Sunday morning. Dean ‘Guido’ Antonelli and John Medlen tuned Capps’ machine to a 3.949 E.T., easily defeating Haddock whose car went silent by halftrack. Round two featured a battle between two former world champions, with Capps lining up opposite J.R. Todd. Capps once again had the holeshot advantage and took his Mopar machine on a winning 4.015-second ride, besting Todd who was up in smoke early into the run. After waiting out a lengthy rain delay in between rounds two and three, Capps went head-to-head with point leader Bob Tasca in the semifinals, and despite being the first to stand on the throttle and making a clean pass, found himself on the wrong end of a good drag race.
Quotable:
“Another solid weekend by this NAPA AutoCare team. When you get one of these yellow Camping World No. 1 qualifier hats, you’re doing something right. We’ve qualified well at every race. That shows we’re making horsepower. Everybody at the DSR shop, great job. This new chassis is unbelievable. Like I’ve said before, we’re a win waiting to happen. We just got outran today in the semis. We had some close races with a lot of changing weather conditions. The big monsoon came after round two, and those NAPA Know How moments that I like to brag about with ‘Guido’ (Dean Antonelli) making the right calls was on full display this weekend. We went down the track every run. We didn’t smoke the tires and beat ourselves. I’m excited about this Western Swing coming up with the added bonus of ending at Pomona this year. Denver is always a big race for Dodge and Mopar. We have a good-running hot rod. We have a great opportunity to ‘sweep the Swing,’ and you can’t do that if you don’t start at Denver.” 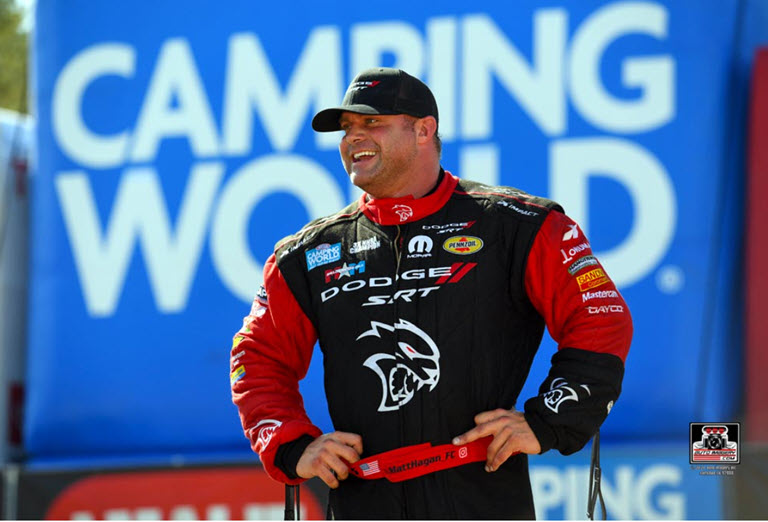 ​
Qualified: No. 3 (3.899 E.T. at 327.82 MPH)
The Results:
E1: 3.948 E.T. at 324.83 MPH defeated Bobby Bode 4.021 E.T. at 308.50 MPH
E2: 4.086 E.T. at 260.16 MPH defeated by Alexis DeJoria 3.952 E.T. at 317.27 MPH
Race Recap:
Matt Hagan and the Mopar Dodge Charger SRT Hellcat Funny Car team were solid during qualifying, earning the No. 3 starting position and three bonus points after recording the third-quickest run of Q1, and second-quickest of Q3. The reigning world champ, and 2018 event champ, lined up opposite Bobby Bode for the first time in eliminations on Sunday morning. Hagan's win-loss record against the rookie driver began with a W when Hagan nabbed the starting line advantage and powered to a 3.948 E.T. for the win. Against Alexis DeJoria, Hagan once again ensured himself an early lead by securing the holeshot advantage. He appeared to be on a good run and was neck-and-neck with DeJoria, who held a slight lead until his machine gave way with a flash and a bang down track, and he was forced to coast to the finish as his competitor drove away with the win.
Quotable:
“We still have a great race car here for Dodge and Mopar, and we were running a really tough opponent that round in Alexis (DeJoria). That team has been running well most of the year, and we have to push. In this class, in 2021, there isn’t a car that you don’t have to press hard against. Overall, I feel really great about our team and the direction we’re moving. Obviously, we want to go more rounds, but we’re gathering the data we need to keep moving forward and put this Hellcat in the winner’s circle, and that’s coming real soon. It’s not too far off. I’m excited about the future. We have a few weeks off and that’s nice cause I have a lot of farming to do back home in Virginia. That gives me the time to get focused for the Western Swing and this summer because we have a lot of races coming fast in a row. We’ll have a great chance to see what these guys do against adversity, and I’m excited for that. I hate that we went out second round, but we continue to learn and there’s a lot of racing left.”