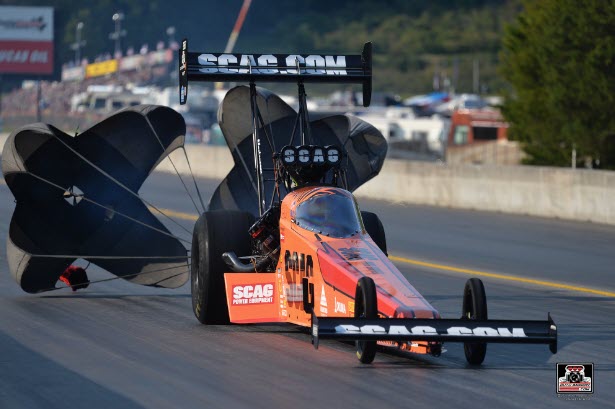 Countdown to the Championship Ranking: 12th
Charlotte II Event Highlights:
Two-time event champion (2008, 2014)
Two-time runner-up (2012, 2013)
2011 No. 1 qualifier
2018 Charlotte II Recap:
Qualified sixth; Semifinal finish (defeated Antron Brown in E1, Clay Millican in E2; defeated by Steve Torrence in E3)
Note: Did Not Compete in 2019, 2021; 2020 canceled due to COVID
Last Event (Reading):
Qualified 11th; First round exit (defeated by Clay Millican in E1)
Career Statistics:
529 races; 86 event wins; 88 No. 1 qualifiers
2022 Statistics:
17 races; one win; one runner-up finish
​
Noteworthy:
Schumacher will make his first Carolina Nationals appearance since 2018
So far in 2022, Schumacher has one win (Seattle), and one runner-up finish (Brainerd, Minn.)
The winningest Top Fuel driver in NHRA history is vying for his ninth series title
Fan Events:
Schumacher and the SCAG Power Equipment show car will visit Pointer’s Ace Hardware (775 Concord Parkway N, Concord) on Thursday, Sept. 22 from 2:00 – 4:00 p.m.
The event is free and open to the public
Quotable:
“I’m looking forward to getting back to Charlotte for the second time this year and racing it ‘normal’ two-wide. We’re in the Countdown, and the fact that Reading didn’t work out well for us really puts the pressure on. We’ve got five races to cowboy-up and get this thing moving. I think we’re heading in the right direction. We made drastic changes in Reading, and I think it’s going to show starting this weekend. The conditions are going to be great, and we’re going to go out and try and win this thing. We’re going to test after Dallas, we’re going to test after Vegas, and we are going to get our car back into winning form.”

About Maynard Family Racing:​
Established in 2022, the Maynard Family Racing organization (JCM) is a single-car NHRA Top Fuel team owned by Joe and Cathi Maynard, along with their partners Eric and Kim Lehman, all of Clarksville, Tenn. The Maynards first became involved in NHRA Drag Racing in 2021 as an associate sponsor of Don Schumacher Racing (DSR) before expanding their involvement to an ownership level during the 2022 NHRA season. It was announced in July 2022 that the Maynards and Lehmans had partnered with Don Schumacher to assume a majority ownership stake of the multi-time championship-winning team.
Headlining the Maynard Family Racing team is eight-time world champion and 86-time NHRA national event winner Tony Schumacher, the most decorated Top Fuel driver in the history of the sport. The team competes on the 22-race NHRA Camping World Drag Racing Series circuit thanks to the support of Scag Power Equipment and Okuma.
For more information, visit @Maynard_Racing on Twitter, @MaynardFamRacing on Facebook, and @MaynardFamilyRacing on Instagram.