Justin Ashley Reaches Semifinals at Carolina Nationals
Another strong performance moves young driver to third in Top Fuel points
​
CHARLOTTE, NC (September 19, 2021) --- Showing no signs of intimidation, second year Top Fuel driver Justin Ashley raced to the semifinals today at the DeWalt NHRA Carolina Nationals at zMax Dragway. In just his second Countdown national event the driver of the Smart Sanitizer Top Fuel dragster powered by Vita C Shot moved up to third in the Countdown point standings with five playoff races remaining. As the No. 6 qualifier Ashley defeated Countdown contenders Leah Pruett and Clay Millican before falling to rookie phenom and eventual race winner Josh Hart in the semifinals.
“It was another very strong race for this Smart Sanitizer Vita C-Shot Top Fuel dragster. These Countdown races are critical,” said Ashley, who over two races has moved up from seventh to third in points. “We treat every race the same whether it is a Countdown race or regular season race. But you do feel a little more pressure and intensity in the Countdown. A lot of these match-ups have Countdown implications so I’m happy we are stacking up rounds wins and obviously our goal is to come out here and win races. We fell a little short today, but (crew chief) Mike Green and (team owner) Dustin Davis did an awesome job. It was really a positive weekend all the way around. We announced Vita C Shot as our co-primary for the rest of this year and all of next year.” 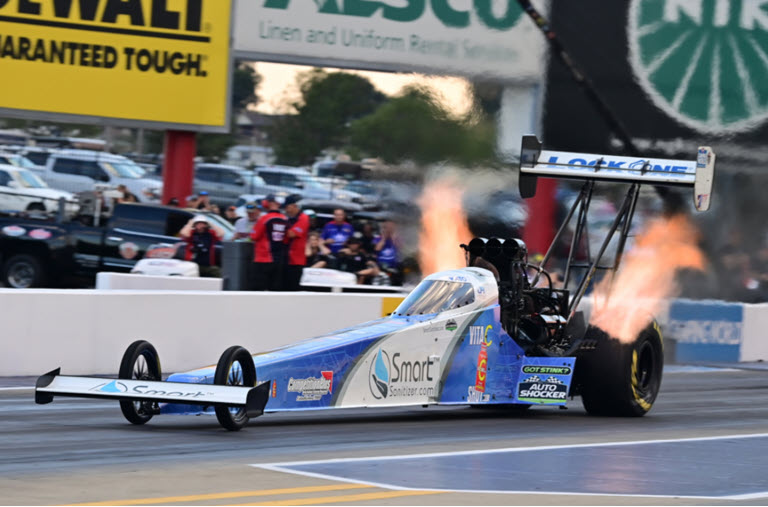 Justin Ashley, Smart Sanitizer Vita C Sot Top Fuel dragster (photo credit Ron Lewis Photography)​
Ashley took the first win light of the DeWalt NHRA Carolina Nationals with a critical win over Pruett. The two Countdown contenders were the first pair of racecars to hit the track on Sunday morning. Ashley and the Smart Sanitize Top Fuel dragster powered by Vita C Shot never trailed in the drag race. He was first off the starting line and posted his quickest run of the weekend a winning 3.731 second pass at 327.59 mph. The run was quick enough for lane choice in the quarterfinals and continued a progression of incrementally quicker runs going back to Saturday’s qualifying session.
In the second round Ashley had lane choice over the veteran driver from Tennessee and once again his Mike Green tuned racecar was up to the task. Track conditions warmed up but Ashley’s Davis Motorsports team made the appropriate adjustments and took another win light with a 3.749 second pass in front of a tire smoking Millican. For the second round in a row Ashley grabbed a starting line advantage and never trailed in the drag race. The round win moved Ashley and his Auto Shocker and KATO Fastening Systems backed Top Fuel dragster into third place around Billy Torrence who Ashley dropped a close final round race to in Reading.
For the third time this season Ashley faced rookie Hart who ran selective races during the regular season but will be attending all the Countdown events. The pair split the win lights in their previous two appearances with Ashley winning the most recent match-up in the first round of the Norwalk Nationals. This afternoon two of the brightest young stars showcased their starting line talents both executing remarkable reaction times but as Ashley began to accelerate his 11,000-horsepower racecar overpowered the track. In a veteran move Ashley attempted to pedal his racecar to chase down Hart but he quickly realized his opponent was on a solid run so he aborted his efforts.
“Getting some of the wins over other Countdown competitors gives us confidence,” said Ashley, the runner-up finisher at the Reading Nationals. “We are going up against the best teams in the world but at the same time we must focus on our lane. Josh isn’t in the Countdown, but he is one of the better racecars out here. Josh has an excellent team, and he is a great driver just like everyone out here. Anyone can win on Sunday. We must stay focused for the last five races, and we are not going to look too far ahead. Our focus now is St. Louis.”
With two more win lights Ashley is in third place in the Top Fuel standings heading to St. Louis’ Midwest Nationals. The 2020 Rookie of the year is just 74 points out of first place which is just four rounds of racing.