DeJoria Takes Shot at New England Nationals with
Bandero Premium Tequila Toyota Funny Car​
Austin, TX (June 10, 2021) --- Alexis DeJoria and her ROKiT Bandero Premium Tequila Toyota Camry Funny Car team have been on the cusp of success numerous times this season. This weekend they will be bringing a new look to the track running a Bandero Premium Tequila branded Toyota Camry Funny Car as part of the TascaParts.com NHRA New England Nationals presented by Bandero Premium Tequila. DeJoria has family ties to the area surrounding New England Dragway and the opportunity to get involved at the sponsorship level and run a specialty Funny Car was too good to pass up.
“New England Dragway and Epping hold a special place in my heart,” said DeJoria. “I love the race track and the passion the fans have for drag racing. For myself and my sister Michaeline we are proud to pair up with NHRA and sponsor this event with our premium tequila company Bandero Tequila. I have had a lot of success in Epping and we want to keep that positive momentum moving forward.”
The team has qualified top three at four of the first five events of the season and the strong qualifying streak actually extends well into last season. At the Charlotte Four-Wide Nationals DeJoria had one of the quickest Funny Cars on race day but a broken blower belt in the final quad relegated them to a semifinal finish. The veteran driver knows she has a race car that can win races and the NHRA New England Nationals would be the perfect place for her first win of 2021.
“We know this team is ready for that first win of the season,” said DeJoria, a five-time nitro Funny Car national event winner. “We have been running great in qualifying and just need to string four runs together on race day. I am feeling more confident behind the wheel and I know I have a great race car every time I roll up to the starting line. It would be cool to put this Bandero Premium Tequila Toyota in the winner’s circle at the Bandero Tequila national event.”
DeJoria has experience and success racing at New England Dragway. This weekend’s race will be her sixth appearance after a three year break. In 2014 she raced to the final round as the No. 5 qualifier outrunning Tony Pedregon, Tommy Johnson, Jr., and John Force before being edged out for the win by Ron Capps. The next season she raced to the quarterfinals taking out Ron Capps in the first round. Her success rate at the New England Dragway can be tied to her strength in qualifying. She has never lost in the first round when she has qualified in the top half of the field.
DeJoria is working with her former teammate and mentor Del Worsham during the 2021 season. Worsham along with veteran Nicky Boninfante are making all the tuning decisions on the ROKiT Toyota Camry Funny Car. The relationship with Worsham goes back to when they were teammates at Kalitta Motorsports and has given DeJoria a high level of comfort and competitiveness.
“Del is one of the best drivers and tuners in the history of the NHRA,” said DeJoria. “He has done it all at so many levels. We work really well together because he understands things from the driver’s perspective.”
Qualifying will begin on Friday with two more sessions on Saturday as DeJoria tries to keep her top qualifying streak alive. Final eliminations will begin at 11:00 a.m. (ET) on Sunday with Fox televising three hours of finals coverage beginning at 1:30 p.m. (ET). 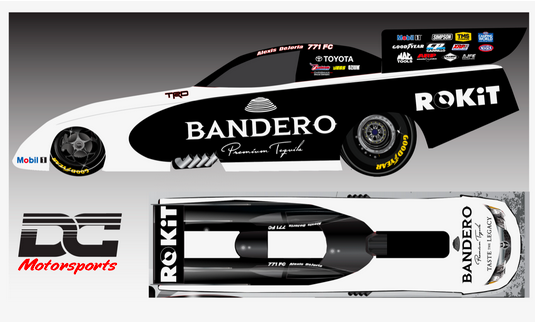