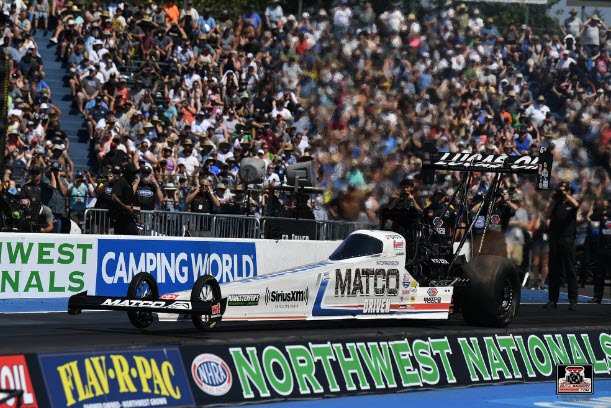 ​
KENT, Wash. (July 31, 2022) – Antron Brown and his AB Motorsports Matco Tools team were solid throughout qualifying at the NHRA Northwest Nationals near Seattle, clocking the third-quickest pass of the second session (3.844 E.T.) before improving upon their time in the final session where Brown posted a 3.837 E.T. to secure a position in the quick-half of the Top Fuel field.
Starting from fifth, Brown drew Leah Pruett as his first-round competitor on race day. The former teammates were nearly even leaving the starting line and kept pace down the 1,000-foot stretch in an exciting side-by-side race. Unfortunately for Brown, despite taking his Matco Tools Top Fueler on its best run of the weekend, the three-time world champ found himself on the bad side of a good drag race, falling to Pruett by a mere 18-thousandths-of-a-second.
“It was almost that ‘get healthy’ weekend this Matco Tools team needed for Toyota and Lucas Oil and all of our loyal partners,” said Brown, a four-time Pacific Raceways event winner. “We ran great on Saturday with two good laps that put us in the number five spot for race day and we had a tough draw against Leah Pruett again in round one. That team is running great with Neal Strausbaugh and Mike Domagala at TSR, and it was a close one. We ran a good lap at 3.79, but it was just a tad off from their 3.78. Our Matco Tools machine was really good to the 330-foot mark and then we had a clutch issue. The results may not show it on paper, but I really do think we turned the corner this weekend. I wish we were going straight to Topeka (Kan.) and qualifying in five days. But, the guys do need a break after the Western Swing. It’s a long three weeks. We’ll go back to Indy, regroup, and come out swinging hard at Topeka and Brainerd (Minn.)”
Brown and the Matco Tools Top Fuel team wrap up the Western Swing sitting 12th in the NHRA Countdown to the Championship Top Fuel rankings. They compete next at the Menards NHRA Nationals presented by PetArmor at Heartland Motorsports Park in Topeka, Kan. 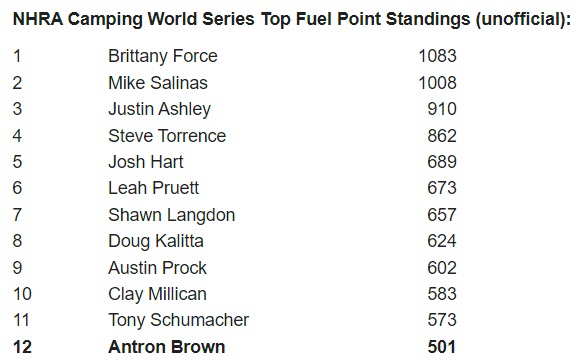 ​
About AB Motorsports​
Established in 2019 and making its on-track debut in 2022, AB Motorsports is a single-car NHRA Top Fuel team owned and operated by three-time world champion Antron Brown. Headquartered in Brownsburg, Ind., the team competes on the 22-race NHRA Camping World Drag Racing Series circuit thanks to the support of Matco Tools, Lucas Oil, Toyota, SiriusXM, Hangsterfer’s Metal Working Lubricants, and Summit Racing Equipment.
Brown, who serves as both the owner and driver of the AB Motorsports Top Fuel dragster, is the only competitor in NHRA history to have won races in both the Top Fuel and Pro Stock Motorcycle categories. Brown is a 68-time NHRA national event winner and became the first Black driver to win a major U.S. auto racing championship when he captured the 2012 NHRA Top Fuel series title.